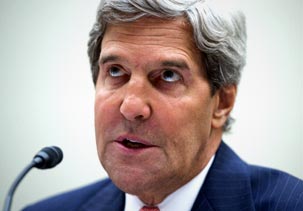 The same can be said about the USA. Our NSA makes the East Germans look like amateurs. That and we throw more people in jail than any nation on earth-more than the Russians.

Just how much botox has this Heinz ketchup gigolo injected into his face, anyway?

Probably the same as that old gigolo McCain who married the beer lady. They are all the same -war mongering , big corporate loving , sadistic sick freaks.

I think Obama takes the cake as far as liars go... it took him only about 60 days after his 1st election to sell out virtually the whole public (98% of it) to his criminal Bankster masters, Wall Street oligarch thug "contributors", and the corporate militarists.

Next up ? A woman oligarch in Hillary Clinton. Oh boy... can't wait.

Is this really all about the petro dollar, with a bit of Israel thrown in, as well?

Yes Kerry is lying. Sucks that the Russian leader has to be the one calling it. And that Iran is so emboldened that their talking heads can threaten to rape the presidents daughter. But that's what happens when you have a bunch of amatuers running the show.

Iran is just egging us on. The last two wars by the US has immensely benefited them. Sadaam and the Taliban were mortal enemies to Iran. We took them both out-so they went from a country surrounded by enemies , to a country that is very regionally powerful.

That and the two wars lowered the power and prestige of the United states. A US led war with a country that borders Israel and has its terrirory occupied by israel(Golan hts) must be like manna from heaven. It would be a gift from the gods to the mullahs who have been facing protests for more freedom from their restless populace.

The mullahs must be praying to Allah everyday that the US gets entangled in another costly endless middle east war. That will cement their power for another decade.

The more things change , the more they stay the same. Dubya the Bush -err Obama the clown-what a system we have. Apparently Obozo the clown is going to go on TV on Tuesday and give one of his patented speeches to make the case for war.

That and we throw more people in jail than any nation on earth-more than the Russians.

As always, example comes from the top management and goes down like a domino.