tâ€™s clear at this point that the recent visit of US President Trump to Saudi Arabia and Israel was about setting events into motion in order to fundamentally alter the present balance of power in the entire Middle East to the greater advantage of the United States and US energy geopolitics. As with most everything that Washington tries to do to rebuild its rapidly declining global dominance, this latest move by Washington to incite the Saudi Kingdom to ignite regime change in Qatar and escalate a form of oil war disguised as a Sunni-Shiâ€™ite power conflict already looks in serious trouble.

I share with you a recent interview with an Arabic-language Middle East magazine in question and answer format.

Q: What can you say about the conflict between Qatar Gulf at this moment after the Arabic-Islamic-American summit at Riyadh?

WE: In my view this is a deep power struggle between Qatar and Saudi Arabia that has little to do with stated reasons regarding Muslim Brotherhood and Iran. The action to isolate Qatar was clearly instigated during US President Trumpâ€™s recent visit in Riyadh where he pushed the unfortunate idea of a Saudi-led â€œArab NATOâ€ to oppose Iranian influence in the region.

The Saudi move, clearly instigated by Prince Bin Salman, Minister of Defense, was not about going against terrorism. If it were about terrorism, bin Salman would have to arrest himself and most of his Saudi cabinet as one of the largest financiers of terrorism in the world, and shut all Saudi-financed madrasses around the world, from Pakistan to Bosnia-Herzgovina to Kosovo. Another factor according to informed sources in Holland is that Washington wanted to punish Qatar for seeking natural gas sales with China priced not in US dollars but in Renminbi. That apparently alarmed Washington, as Qatar is the worldâ€™s largest LNG exporter and most to Asia.

Moreover, Qatar was acting increasingly independent of the heavy Wahhabite hand of Saudi Arabia and threatening Saudi domination over the Gulf States. Kuwait, Oman, as well as non-Gulf Turkey were coming closer to Qatar and even Pakistan now may think twice about joining a Saudi-led â€œArab NATOâ€. Bin Salman has proven a disaster as a defense strategist, as proven in the Yemen debacle.

As to the future, it appears that Qatar is not about to rollover and surrender in face of Saudi actions. Already Sheikh Tamim bin Hamad al-Thani is moving to establish closer ties with Iran, with Turkey that might include Turkish military support, and most recently with Russia. Kuwait and Oman are urgently trying to get Saudi to backdown on this, but that is unlikely as behind Saudi Arabia stands the US and promises of tens of billions of dollars in US arms. This foolish US move to use their proxy, in this case Riyadh, to discipline those not â€œbehavingâ€ according to Washington wishes, could well be the turning point, the point of collapse of US remaining influence in the entire Middle East in the next several years. 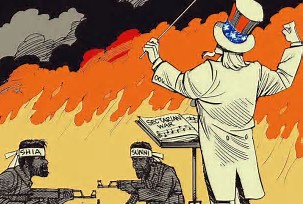 I think a better explanation is here:

Saudi Arabia, the United Arab Emirates, Egypt and Bahrain have broken off diplomatic relations and all land sea and air contacts with fellow Gulf Arab state Qatar on Monday.Saudi Arabia said the move was necessary to protect the kingdom from what it described as terrorism and extremism. The kingdom also pulled all Qatari troops from the ongoing war in Yemen.The official state news agency, citing an official source, said Saudi Arabia had decided to sever diplomatic and consular relations with Qatar proceeding from the exercise of its sovereign right guaranteed by international law and the protection of national security from...

Another factor according to informed sources in Holland is that Washington wanted to punish Qatar for seeking natural gas sales with China priced not in US dollars but in Renminbi. That apparently alarmed Washington, as Qatar is the worldâ€™s largest LNG exporter and most to Asia.

I'll bet it alarmed washington. The entire US government house of cards relies totally on oil and gas being priced in dollars.

proxy, in this case Riyadh

The relationship has reversed following Nixon's disastrous secret deals with the Saudis. 9/11 and continuing financing of terrorism, and hiding OBL in Pakistan, and capturing DC via "think tanks" and universities and PR firms: they have reduced the American eagle to a Saudi falcon. As President JQ Adams observed, Islam is a doctrine of conquest by force or fraud. "Allah is the best deceiver." The USA is not winning in the middle east, but Petrodollar baksheesh enables corrupt patronage networks to keep the game going.

It will be worth it.

"War! What is it good for?"
The wallets of the 1% & the owners of the rest of you.
How about about the fucking trash that profit in the market
in stocks that kill people?

The next Military Industrial Complex War might come to a neighbor
near you. Do your loved ones live there?
Fuck your loved ones! All you love is money.

A Natural Gas War Is Brewing In The Mediterranean.

Offshore gas developments in the East Mediterranean region are heating up. Alongside increased exploration efforts and a possible gas pipeline deal between Turkey and Israel, geopolitical risks are increasing too. While commercial prospects are starting to look good for all parties, a real military conflict is also brewing and may come to a head if Cyprus, Greece and Turkey are not able to find a solution soon.

They will eventually find a solution. I just hope there is a hell of a lot of gas there, as most of Europe has to rely on Russia for now.

Won't happen. When prices go up, US and Candian fracking becomes more profitable and production increases.

Anyway, the relentless march of improvements to solar tech will eventually make solar cheaper than oil:

Synthetic oil may still be used to transport energy, but it will be generated with solar power, cutting off the need for Saudi oil and therefore cutting off the funding for global Islamic terrorism, which originates mostly from Saudi teaching or funding.

I have never understood why environmentalists keep bringing up global warming, a controversial subject, when they push for clean energy. All they have to do is argue about pollution. No one denies the need to curb pollution. You solve the pollution problem, and global warming solves itself.