https://greenwald.substack.com/p/the-new-domestic-war-on-terror-is
If you identify as a conservative and continue to believe that your prime enemies are ordinary leftists, or you identify as a leftist and believe your prime enemies are Republican citizens, you will fall perfectly into the trap set for you. Namely, you will ignore your real enemies, the ones who actually wield power at your expense: ruling class elites, who really do not care about “right v. left” and most definitely do not care about “Republican v. Democrat” — as evidenced by the fact that they fund both parties — but instead care only about one thing: stability, or preservation of the prevailing neoliberal order.

Unlike so many ordinary citizens addicted to trivial partisan warfare, these ruling class elites know who their real enemies are: anyone who steps outside the limits and rules of the game they have crafted and who seeks to disrupt the system that preserves their prerogatives and status. The one who put this best was probably Barack Obama when he was president, when he observed — correctly — that the perceived warfare between establishment Democratic and Republican elites was mostly theater, and on the question of what they actually believe, they’re both “fighting inside the 40 yard line” together.
...
A standard Goldman Sachs banker or Silicon Valley executive has far more in common, and is far more comfortable, with Chuck Schumer, Nancy Pelosi, Mitch McConnell, Mitt Romney and Paul Ryan than they do with the ordinary American citizen. Except when it means a mildly disruptive presence — like Trump — they barely care whether Democrats or Republicans rule various organs of government, or whether people who call themselves “liberals” or “conservatives” ascend to power. Some left-wing members of Congress, including Rep. Alexandria Ocasio-Cortez (D-NY) and Ilhan Omar (D-MN) have said they oppose a new domestic terrorism law, but Democrats will have no trouble forming a majority by partnering with their neocon GOP allies like Liz Cheney to get it done, as they did earlier this year to stop the withdrawal of troops from Afghanistan and Germany.

Even the left/right thing is just as much bullshit as the exaggerated "race issue".

It's about their keeping power and censoring our voices.

1. free speech
2. voting integrity
3. an end to outsourcing to China and insourcing illegals
3

their real aim is to criminalize that which should not be criminalized: speech, association, protests, opposition to the new ruling coalition.

Continuing to process Washington debates of this sort primarily through the prism of “Democrat v. Republican” or even “left v. right” is a sure ticket to the destruction of core rights. There are times when powers of repression and censorship are aimed more at the left and times when they are aimed more at the right, but it is neither inherently a left-wing nor a right-wing tactic. It is a ruling class tactic, and it will be deployed against anyone perceived to be a dissident to ruling class interests and orthodoxies no matter where on the ideological spectrum they reside.

The last several months of politician-and-journalist-demanded Silicon Valley censorship has targeted the right, but prior to that and simultaneously it has often targeted those perceived as on the left. The government has frequently declared right-wing domestic groups “terrorists,” while in the 1960s and 1970s it was left-wing groups devoted to anti-war activism which bore that designation. In 2011, British police designated the London version of Occupy Wall Street a “terrorist” group. In the 1980s, the African National Congress was so designated. “Terrorism” is an amorphous term that was created, and will always be used, to outlaw formidable dissent no matter its source or ideology.

Neoliberalism and imperialism do not care about the pseudo-fights between the two parties or the cable TV bickering of the day. They do not like the far left or the far right. They do not like extremism of any kind. They do not support Communism and they do not support neo-Nazism or some fascist revolution. They care only about one thing: disempowering and crushing anyone who dissents from and threatens their hegemony. They care about stopping dissidents. All the weapons they build and institutions they assemble — the FBI, the DOJ, the CIA, the NSA, oligarchical power — exist for that sole and exclusive purpose, to fortify their power by rewarding those who accede to their pieties and crushing those who do not.

Biden's team/DNC engineered this event to foment FUD and enable a military presence in DC and nationwide.


Christopher6 hr ago
Agreed. Look at the photos of the original rally. It looked like more people showed up for that than Trump's original inauguration! Then a few hundred people, Capital police say 175 but it could be more, made fools of themselves AFTER they were USHERED into the Capitol! This is the SAME playbook the govt runs on ANY movement that stands in the way of the oligarchs and MIC. From Black Panthers to Trump voters it's the same con and Americans keep falling for it. And now, America HAS fallen. Biden DID NOT win this election. I was willing to believe he had and being a trained Political Scientist from a top ten school I wanted to believe he had. The only problem? The more I looked at the people who knew what they were talking about WHO SHOULD HAVE BEEN EASY TO PROVE WRONG, no one did! No one audited the computer systems, the code, the physical ballots, the state laws, etc. I'm a frigging Dem Socialist for effs sake I do not want to be cheerleading for DT! BUT I am an American and I believe in our Democracy. Which the current leaders of the R's and D's (one party two names) do not. They WANT it rigged and they want the majority of Americans to ACCEPT that it is rigged because once that is done "the American Experiment" is over. And it is.


Galleta3 hr ago
I agree too. They wanted violence in Charlottesville and funneled the groups together. They removed the barriers to entry so they would enter the Capitol. Probably some intelligence spook instigators in the crowds


Iconoclast1 hr ago
There is a silver lining. A first time political outsider, who most conservatives didn't really actually like, and who was attacked from both sides the moment he won primaries, still managed to win the presidency once and almost win it again even when they likely cheated as hard as they have since Kennedy. Imagine if the base had actually liked Trump. He also rallied working class blue collar workers to the GOP like no candidate in my lifetime. Smart political consultants should be able to parlay all this into major victories over the next decade.

I think Glenn's point is that today, the definitions are changing so that a White Supremacist is anyone the Deep State feels threatened by. 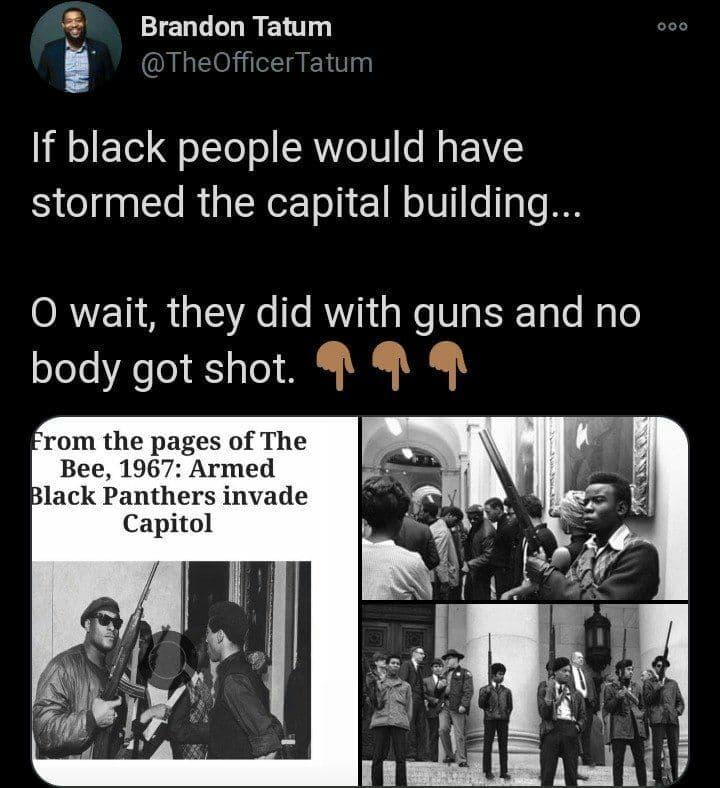