U.S. cities that virtue signaled by defunding their police departments are seeing record crime levels, forcing many city leaders to rethink their basic levels of intelligence.

Here's what has happened in a few cities that voted to slash police budgets:

Homicide grew by 44% in New York, which had 1,531 shootings and 462 murders in 2020.
Homicides also increased 36% in L.A. to 350, leading the police chief to say "a decade of progress" has been erased.
Minneapolis, the center of the "Defund the Police" movement, saw a 46% increase in murders.
Oakland, California has seen a staggering 314% increase in homicides.
Portland, Oregon has seen murders triple.
Austin, Texas has had a 26% increase in aggravated assault reports.
Chicago saw a 65% increase in homicides from June 2020 to February 2021, despite arrests dropping 53%.
Philadelphia hit a 30-year-high with homicides in 2020, with 499 people murdered.
Even smaller cities like Louisville, Kentucky had a record high of 173 murders and is on track to surpass that this year.
The New York Times reported that many such cities are now expanding their police budgets to try to deal with these outcomes that absolutely no one could have seen coming. 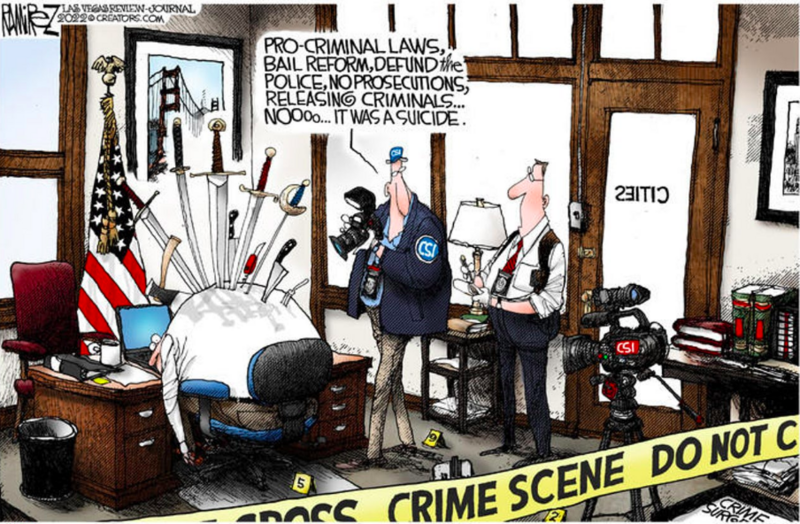 107   Misc   2022 Jun 7, 9:47am
Crime could be increasing because criminals just aren't that worried about cops that bend the knee to the BLM or are scared of doing their duty to protect kids from an active shooter or in an area near where I am; scared of getting wet.

What do we have soy police.

Also, do the BART police do anything more than harass people with sandwiches?
108 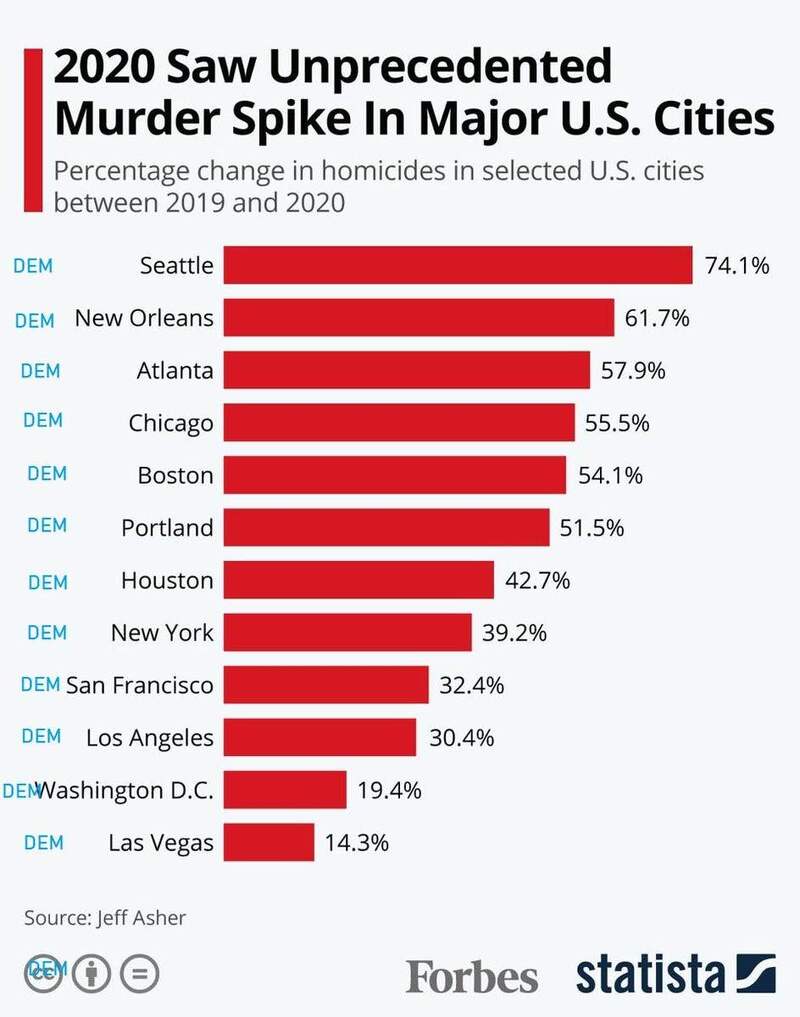 Not far from where I spent my first nine years.
111 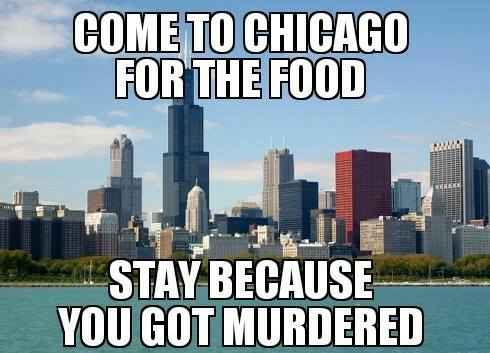 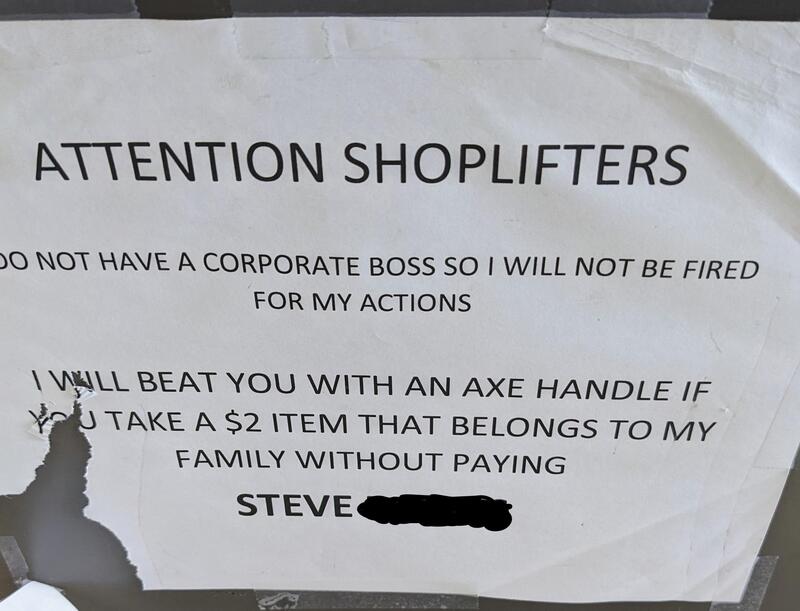 They laugh in your face.

They run this city and they know it.

They are unstoppable and they know it.

Portland reporter @GenevieveReaume has obtained shocking video footage of a Portland woman who was shot in the face while driving. Survivor Katie Guzenko has been speaking out about the city’s surge in shootings.

New York's bail reform laws went into effect in 2020, and the law currently eliminates bail for most misdemeanors and nonviolent felonies, meaning that most criminals arrested for these crimes are freed without restrictions, usually within a few hours of their arrest.

Not surprisingly, this has led to wild rates of recidivism, as criminals play the justice system and rack up arrest over arrest. According to the NYPD, some of the worst statistics involve 10 criminals who together have racked up 485 arrests.


Not surprisingly, this has led to wild rates of recidivism, as criminals play the justice system and rack up arrest over arrest.

The criminals are being educated that they are now deputized against the people. This is the why of the rise of vigilantism.
121

Libs of TikTok
@libsoftiktok
Aug 17
Thieves steal thousands of dollars worth of liquor at a store in Los Angeles.

It is the unwillingness of black leaders to recognize the dismal state of fatherless black males that is leading to increased crime. The mayor of New Orleans goes above and beyond denial, to supporting those who commit crimes.

"So, the mayor of the city, Latoya Cantrell, showed up to the sentencing, but here's the twist in the story. Mayor Cantrell didn't show up to support the victims, the women who'd been terrorized by this predator. No, the mayor showed up to support the carjacker and to let the entire city know that she was doing it, to let everyone know whose side she was on."
https://www.foxnews.com/opinion/tucker-carlson-carjacking-clearest-possible-sign-civilization-falling-apart

Why fetal alcohol syndrome is bad: 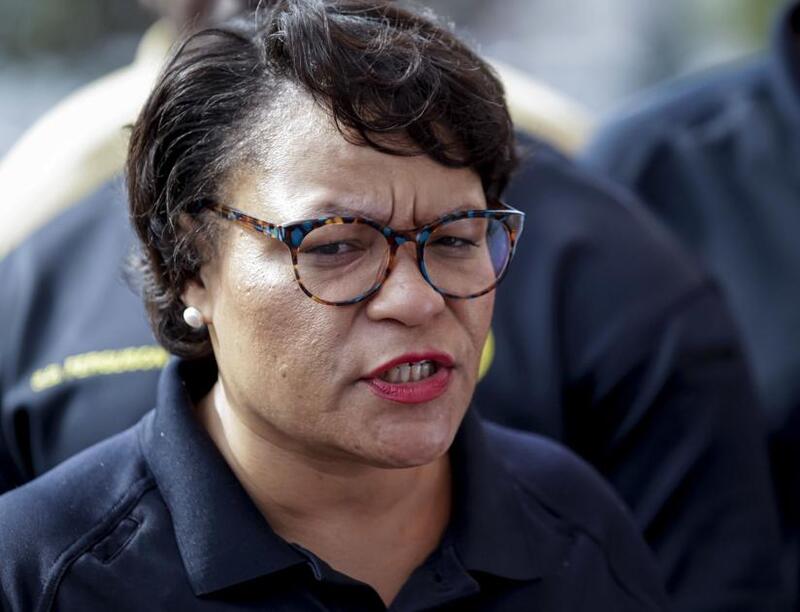 Ceffer   2022 Aug 29, 4:11pm
Lol! The 'Soros Fecal Impaction MKUltra Labs' where they crank out these political orcs is making them uglier and uglier. Netflix is going to have to start getting uglier white cheerleader fuckers and computer geniuses.
127

Those aren't real glasses. Look at the right, there's no distortion of her face. I wear 1.25 reading glasses, the weakest you can get, you'd see distortion with mine.
128

In 2019, for the first time since World War Two — except one year, 1964 — Democrats won total control of state government. And the number one item on their “To Do” list was to pass a no-jail law, requiring the immediate release of suspects arrested for basically anything short of intentional murder.

The no-jail law went into effect in January 2020.

For the first six months, the no-jail law worked great! Of course, it’s freezing from January through March and then the entire city was shut down for Covid. Apparently, street crime disappears when there’s no one on the street. But then, on May 25, a fentanyl addict was killed by police in Minneapolis, unleashing a bacchanal of violence in Democratic-controlled towns across the land.

It had taken twenty years for New York mayors Rudy Giuliani and Michael Bloomberg to round up the criminals. It took only one year for Democrats to release them.

In a total surprise to the party in power, criminals continued to commit crimes. But this time, they knew that, even if they got arrested, they’d be right back on the street in about an hour.

On the bright side, there are a lot fewer rich people to inconvenience, what with 300,000 of them fleeing New York in 2020 — mostly to Florida — and depriving the city of $21 billion in taxable income. Let’s just hope the criminals are religious about reporting all their income. 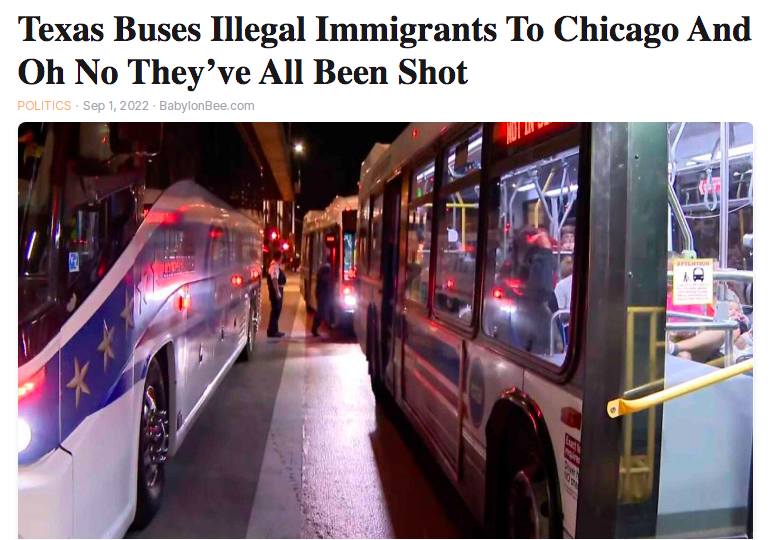 In a total surprise to the party in power, criminals continued to commit crimes.

Was it really a surprise to them. Me thinks everything we're experiencing is on purpose.
Patrick says


Ok, so, almost crime free? Even a 97% surge would still make it low crime. 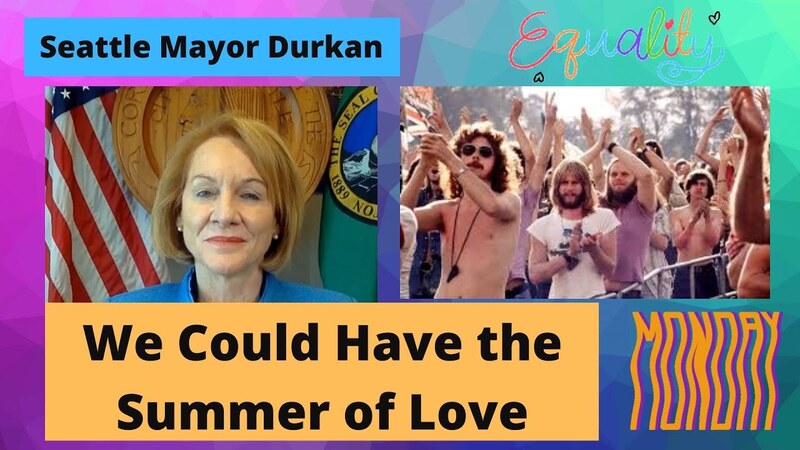 Here's a bit of very useful information for anyone on the road, by the way:

"As a reminder, law enforcement vehicles come in many different sizes and shapes," Bright police officials said. "If you ever have a question about an unmarked vehicle pulling you over, please put your hazard (lights) on, continue at a safe speed, and call 9-1-1 to confirm the identity of the vehicle."

gabbar   2022 Sep 11, 6:36pm
Isn't fear and chaos in the lives of ordinary people in the interest of the elites? If yes, why should there be law and order? Just playing devil's advocate here.
138

@libsoftiktok
Sep 13
Newly released footage of a May robbery shows two men being robbed at gunpoint while eating in a restaurant in Los Angeles. Welcome to California.

Old comment, but it's why I no longer go to Chicago anymore. I hear about waaaaay more than you outsiders do (not a knock). I just have OTA TV and get the Chicago affiliate stations. So I hear the stories every morning, don't really watch. 50% of Chicago is a war zone basically. And now it's spreading into tourist areas with crime.

I believe I looked up before, but over the same time span of the Iraq war, more Americans died in Chicago ALONE than in Iraq. CPD is having record numbers of officer suicides this year. Cops are leaving in droves once vested and going to suburban departments or other states for similar pay and generally sitting around, and most dangerous part of a day would be dealing with a domestic situation instead of being shot at.

It will continue to get worse. I don't know that major cities can turn it around. It could take decade(s). Kind of late 80's-90's style. I personally don't get it. I mean pot is legal in IL now, so that crime should have dropped off the map, but bangers are still fighting for territory. Opioids are the devil man and that's what it is. Coke and crack in the same realm.

Came to find out when I was in Montana that it almost destroyed/killed the wife of a very good friend. Is a nurse, makes good money. She was fired for stealing pills at the hospital. I don't even take OTC meds for pain.

Drug thing aside, I also feel like some of the crime is just stealing from people on the street or car jacking. And that's what is happening in the tourist areas of Chicago. You cannot have a thriving city if that shit is happening.
140

The long-running television show COPS is returning to television, two years after it was canceled during the Black Lives Matter riots over George Floyd.
The popular show debuted in March of 1989 and ran until June 9, 2020, when Paramount pulled it off the air in support of Black Lives Matter.

And that's what is happening in the tourist areas of Chicago. You cannot have a thriving city if that shit is happening.

Entire midwest used to go to Chicago for urban entertainment. I went every two years or so sent by my professional committee, usually in early fall. I liked it then for the days I was there, was surprised I could afford a spacious brownstone in the best leafy areas around Hancock building if I wanted to transfer my California equity.
It's reduction of more complex, advanced civilization back to feuding warlords status. Instead of feuding political factions, you have literal pidgin chieftains wandering the infrastructure shells they have no capacity to maintain. This all, of course, is the programmed destruction inflicted by the subversives and treasonistas.
142 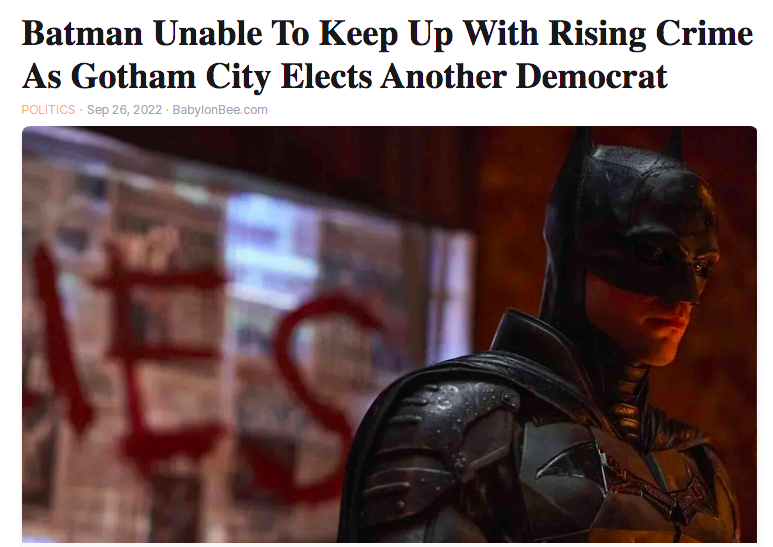