This is not journalism. This is political advocacy, and it’s all done in service of a traditional beneficiary of the press’s ethical lapses.

Imagine, for a moment, if one of the three major networks published a story advising businesses on how to “fight” ultra-permissive abortion laws. It’d be unthinkable. Yet, here, is CBS doing exactly that sort of politicking, but for bills such as the one passed recently in Georgia.

Perhaps realizing it had strayed headfirst into political advocacy, CBS amended the report’s headline eventually, softening its tone into something decidedly less partisan.

The headline as it appears online now reads, “Activists are calling on big companies to challenge new voting laws. Here's what they're asking for.”

In a way, this is actually worse than the original. At least in the original, CBS had the guts to declare its allegiance outright. The amended version chooses instead to hide behind “activists” to push an obvious political position.

As for the report itself, it remains unchanged. It still outlines various ways in which businesses can “fight” voting laws championed by Republican legislatures. It is still just as partisan as the day it first published.

“Do not donate," the report recommends. "Activists said companies should immediately stop making donations to Barry Fleming and Michael Dugan, the Georgia Republicans who co-sponsored the voting changes."

It continues, naming and shaming major businesses such as Delta and Home Depot for donating to Fleming and Dugan.

"Ending political donations is one of the most immediately impactful steps a company can take to sway lawmakers," the article reads.

The article also says companies can help fight Georgia-style voting laws by producing ads that "help stamp out efforts nationwide to pass voting laws similar to Georgia's," including in Arizona and Texas.

"Activists say it isn't enough for companies to issue tepid public statements in defense of voting rights," the CBS report reads. "Instead, companies should launch television and social media ads that oppose efforts in Georgia, Arizona, Texas and other states considering voter restrictions."

Companies, the story continues, can also support the coercive monstrosity known as the “For the People Act."

"If passed,” the CBS report reads, “the act would create same-day and online voter registration nationwide. It would also require states to overhaul their registration systems. The act seeks to expand absentee voting, limit the states' ability to remove people from voter rolls, increase federal funds for election security and reform the redistricting process.”

Though the CBS article is several days old, you likely missed it amid the network’s other major ethical lapse, when it promoted the lie that Republican Florida Gov. Ron DeSantis rewarded a grocery chain with an “exclusive” deal to distribute coronavirus vaccines as part of a “pay for play” scheme involving political contributions.

If you missed all of this voting law boycott business when it happened, you can be forgiven. After all, CBS’s “report” on DeSantis is possibly the worst political hit job since Dan Rather went on-air with forgeries of former President George W. Bush's National Guard service record.

It’s obviously not a great situation when one media scandal is obscured by a concurrent scandal and all by the same newsroom. If there are adults still left at CBS, now would be a good time to take back control. 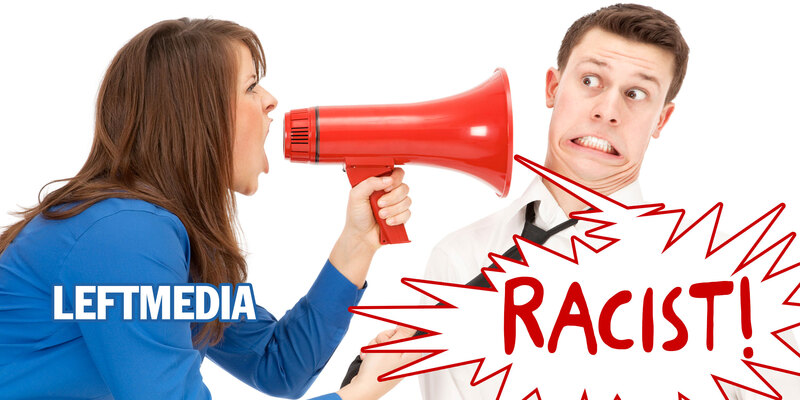 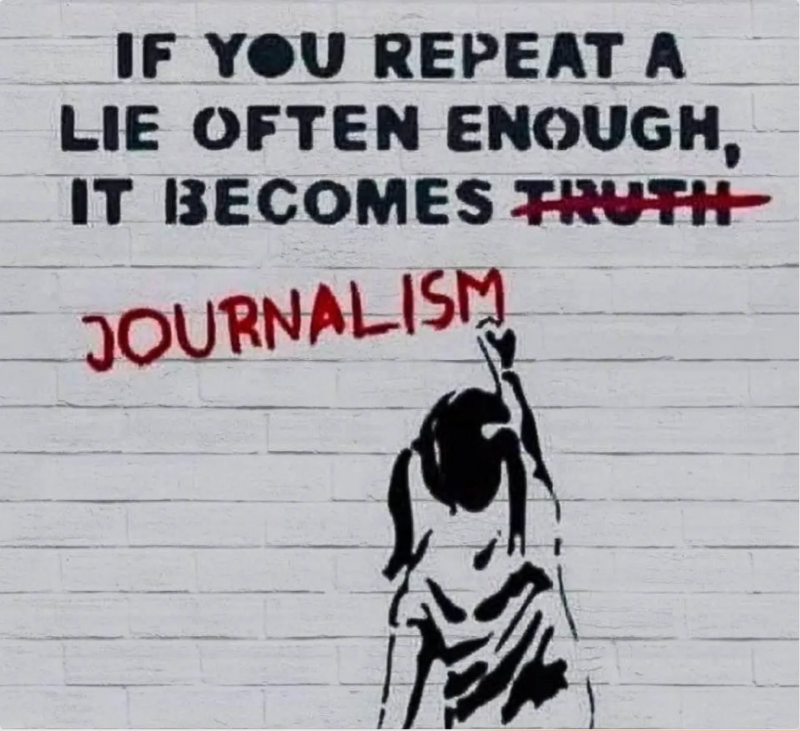 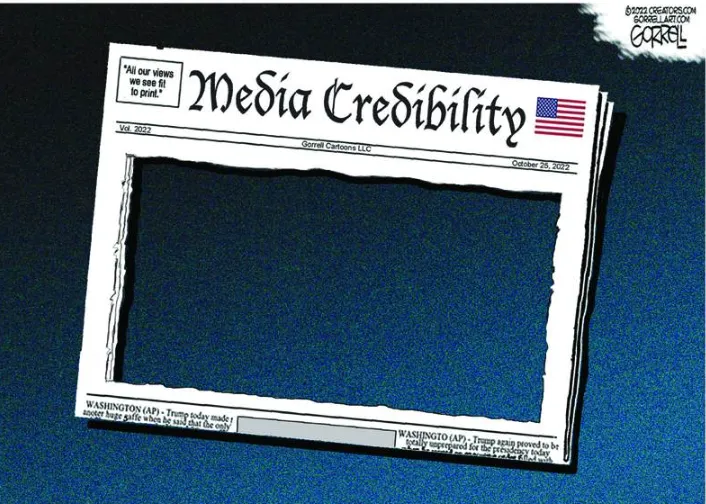 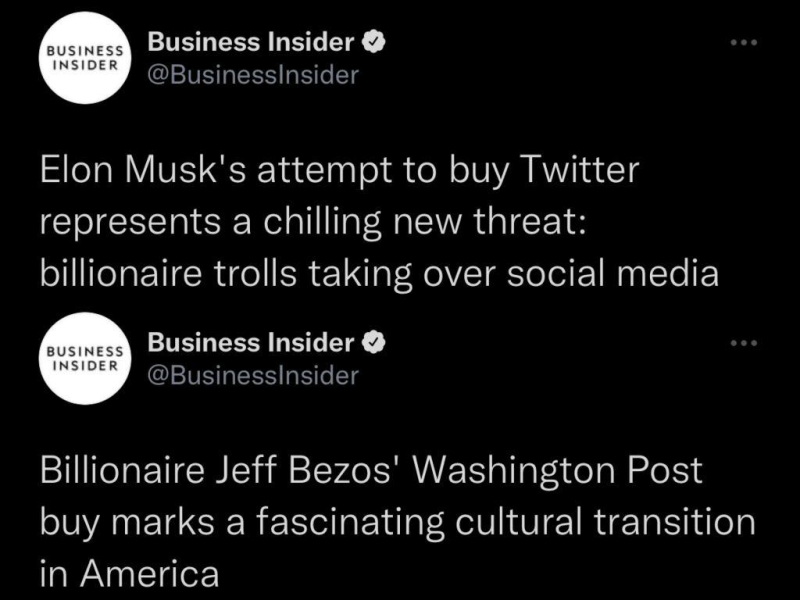 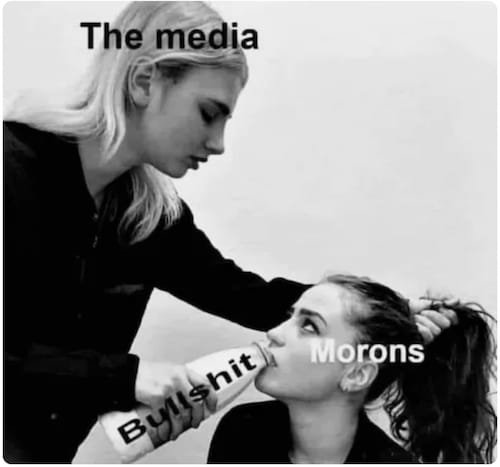 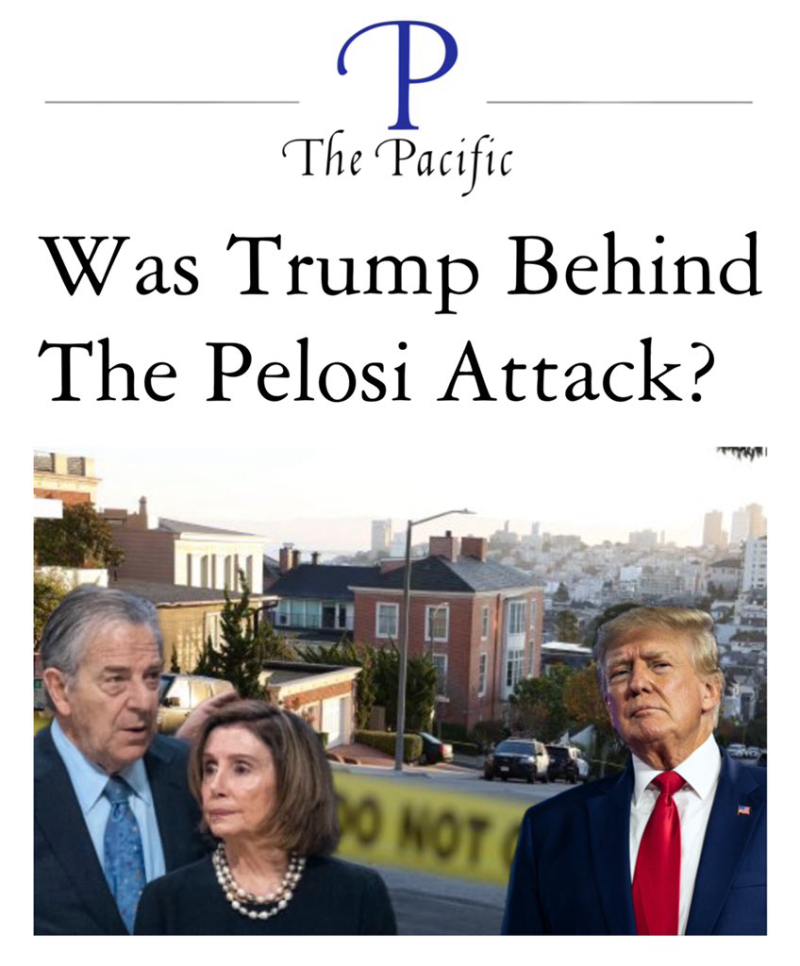 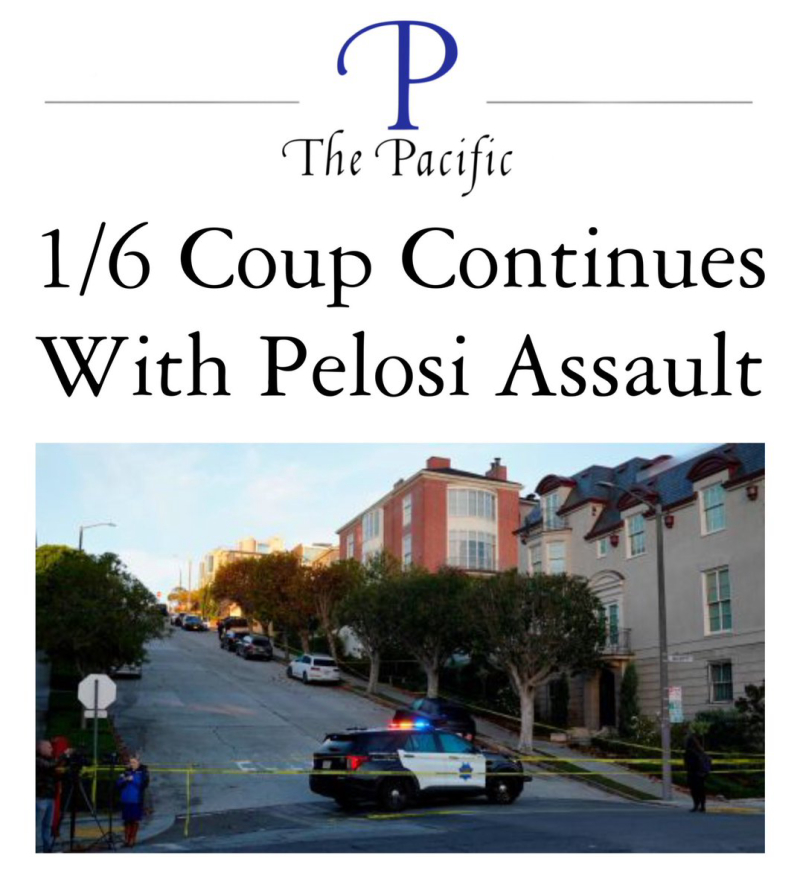 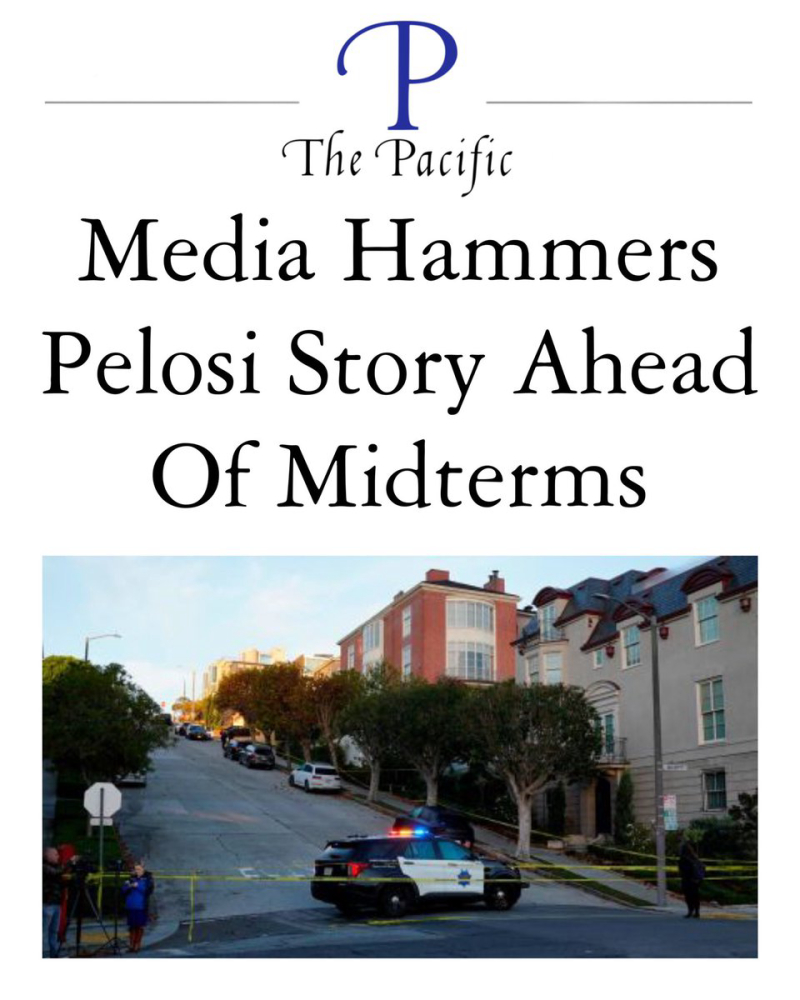 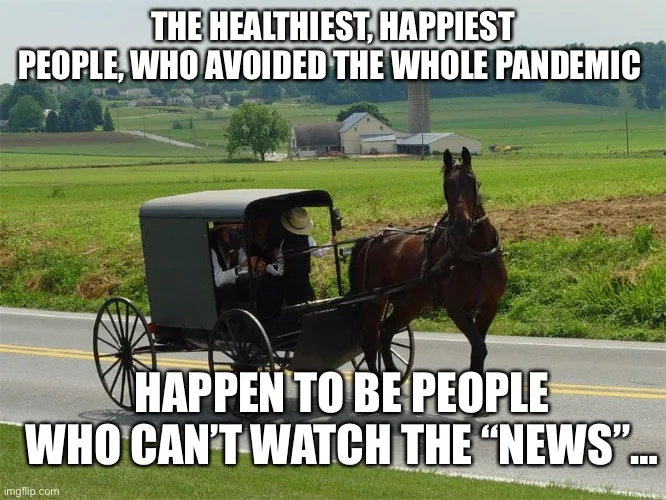 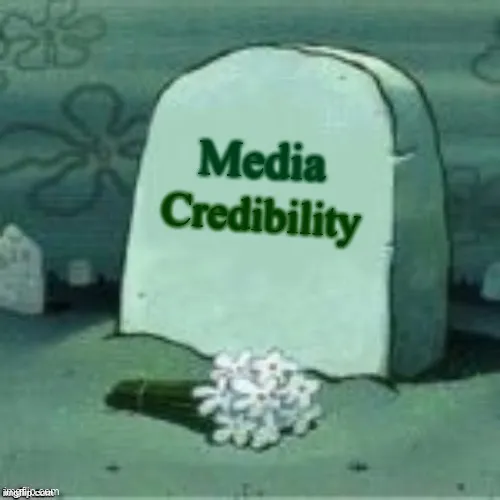 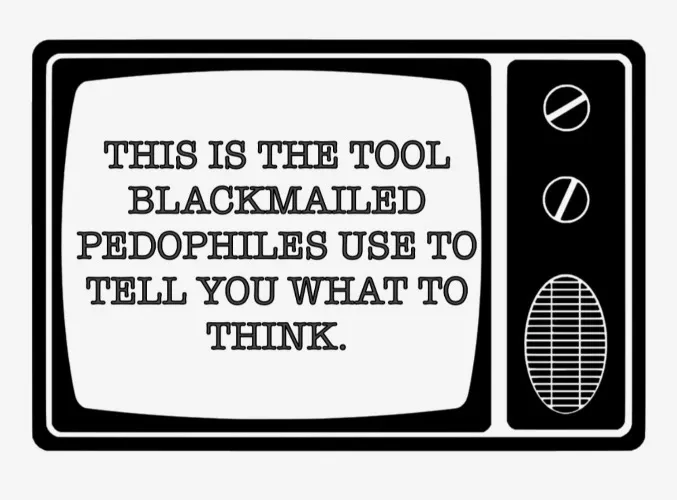 "To anyone who doesn't speak out against this politically-motivated attack on House Speaker Nancy Pelosi's husband, I will say only this: your silence is deafening." Joe Scarborough of MSNBC addressed his viewer this morning in his first recent coverage of political violence amid several months of firebombed pregnancy centers and churches, an assassination attempt on a sitting Supreme Court Justice, and the running down of 18-year-old Cayler Ellingson in a truck for being a Republican. 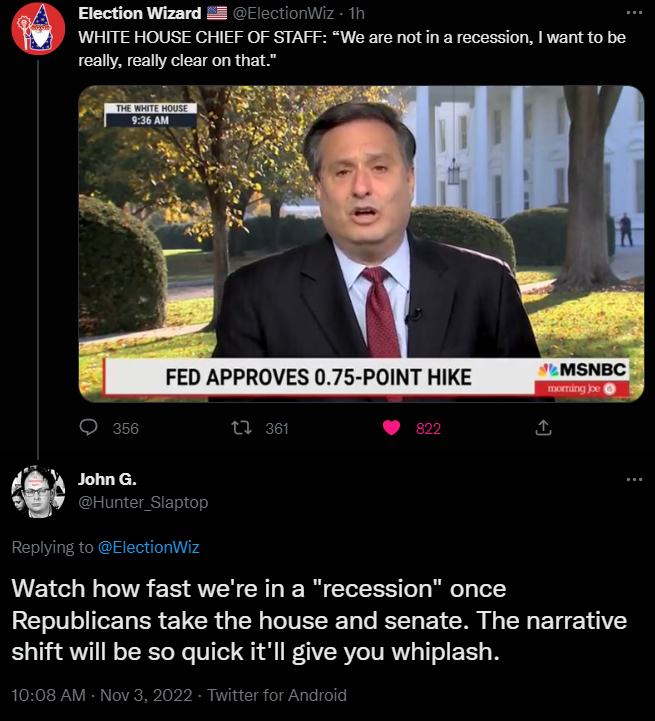 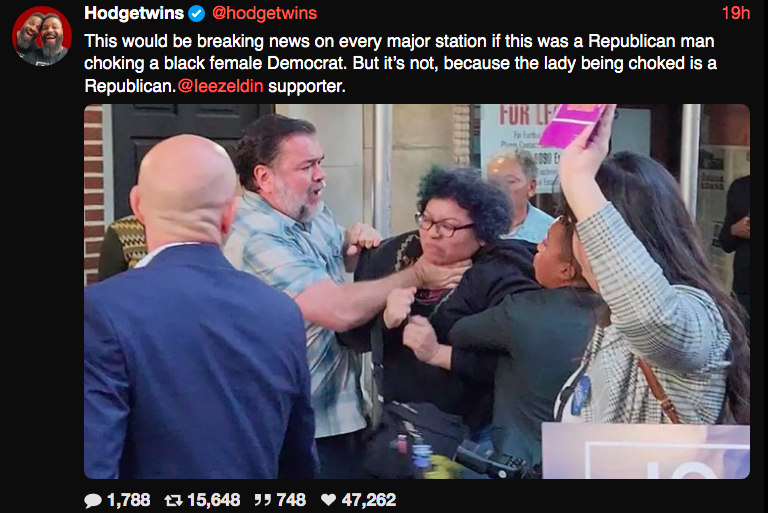 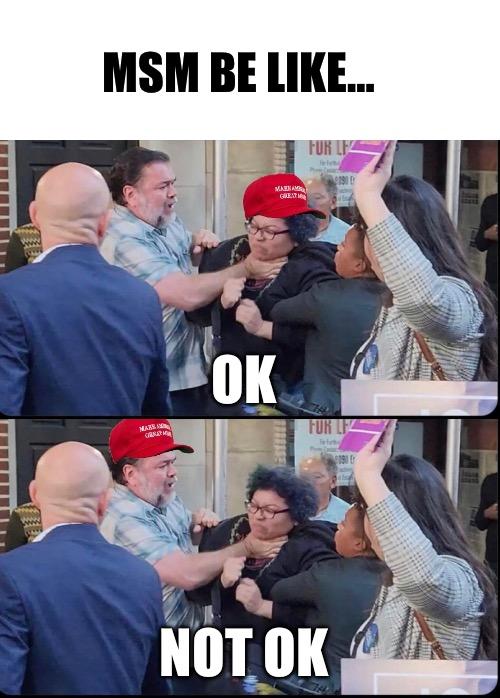 Journalists are among the enemies of free people. It's time to take names and listing their crimes. After France (those fucking frogs) was liberated in 1945, up to 100K people were murdered just to settle scores. You might have seen the pics of women with heads shaved, but there were far worse deeds done. Right after the war, there were 100X the number of people who claimed to have fought with the resistance, but they were only opportunists who seized the opportunity to execute blood libel against their traditional enemies under the guise of "justice to the collaborators."
615   Hugh_Mongous   2022 Nov 7, 10:15pm
Was it ever as pure and impartial as we thought it was? Was Bob Woodward's reporting on Watergate any better than his "reporting" on Trump's White House?
616 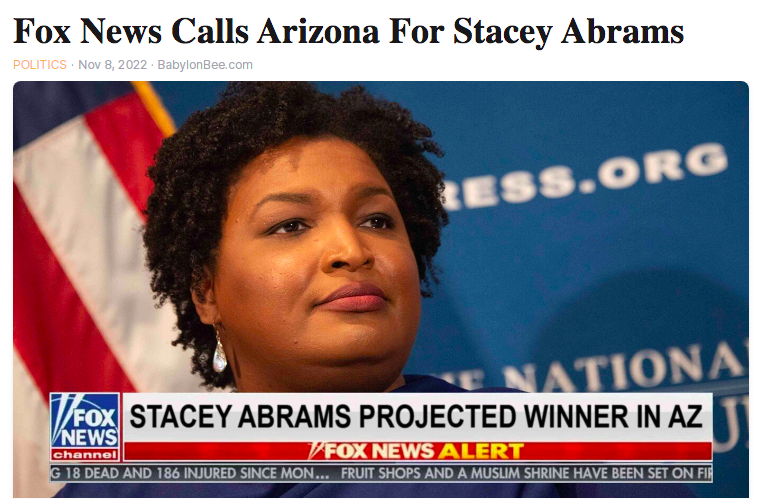 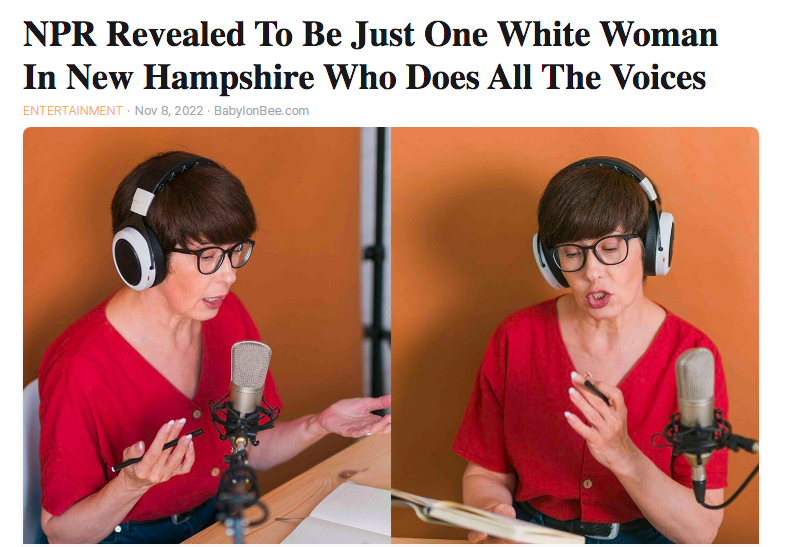 A multiyear effort by a group of investigative journalists from all over the world revealed that Karen Atkinson, a 49-year-old knitting blogger, podcaster, and radio host, has been the voice of every personality in NPR production for the last 20 years. Atkinson also teaches Gender Studies and Fat Studies at Wellesley College.

"I always thought all the voices sounded the same," said NPR listener Karen Owens. "That nasally, sort of mousy, high-pitched monotone. I guess I shouldn't be surprised it's all the same person. But I do feel a bit misled."

Jeremiah Patterson, the head of the group of investigative journalists that discovered Karen's identity, spoke to the media on Tuesday. "We first grew suspicious when we noticed that everyone on NPR sounds the exact same and thinks the exact same."

An NPR spokesperson declined to comment. Atkinson is expected to remain in her role. 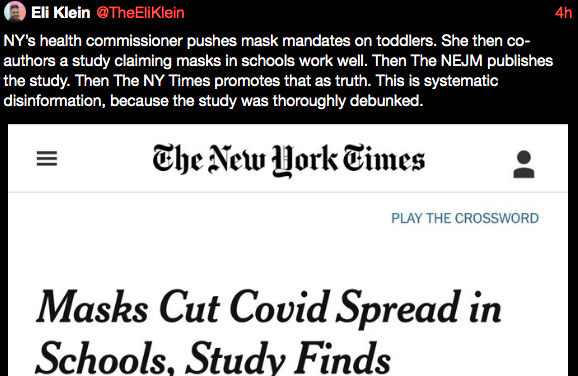 A major US university just had a mass shooting attack and this is how the Washington Post has chosen to cover the alleged attacker: 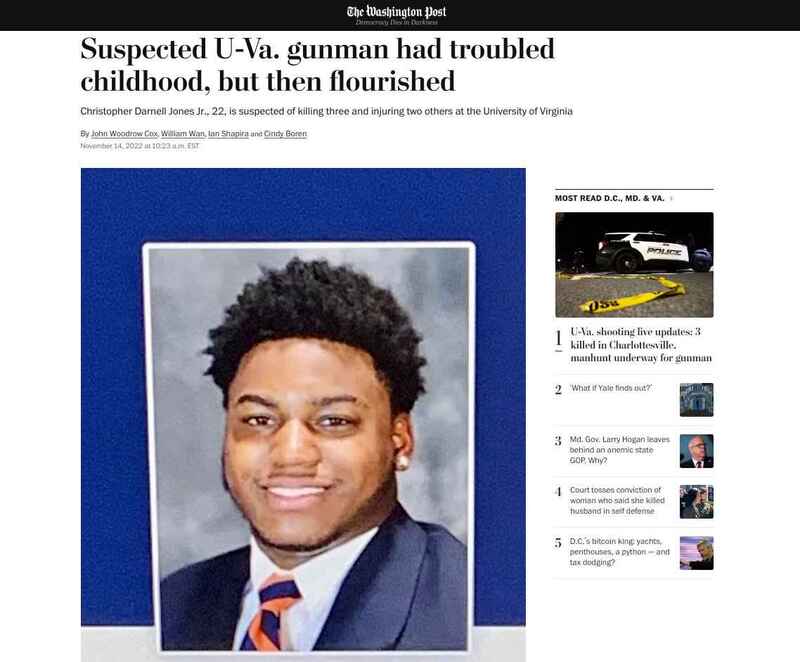 But this guy who just reportedly murdered three young men at the University of Virginia is a poor man with a troubled childhood. Just a "austere religious scholar" who went wrong.

Could it possibly be that this shooting just doesn't fit the prevailing media narrative about mass shootings?

Ask yourself in these situations: What headline and coverage would this story receive if the suspected gunman were white?


Ask yourself in these situations: What headline and coverage would this story receive if the suspected gunman were white?

The Virginia newspaper Daily Press had this UVA shooting story on the front page. The story contained 3 large pictures of the victims, plus short bios. Lots of talk about devotions and homages. No picture of the shooter. I figured that the shooter was Black since they omitted the picture.
623

“The Washington establishment wants to silence us,” Trump said, as CNN conveniently cut away from the speech and allowed its so-called analysts to weigh in.

""
Journalists are still getting fooled by these fake fired Twitter employees after Elon "rehired" them...

The pranksters, "Ligma" and "Johnson," stood outside Twitter HQ and told the media clowns they'd been fired by Elon Musk after his takeover of the company.

Because the media is now made up of clapping seals with an agenda, they were completely oblivious to the fact that the guys were mocking them.

Two weeks later, Memelord Elon got in on the action by "rehiring" the pranksters and posting this to socials:

Everyone with an ounce of humor and common sense understood the joke.

But since the clapping seals have lost all sense of objectivity, truth, and reason, they fell headfirst into the trap AGAIN. 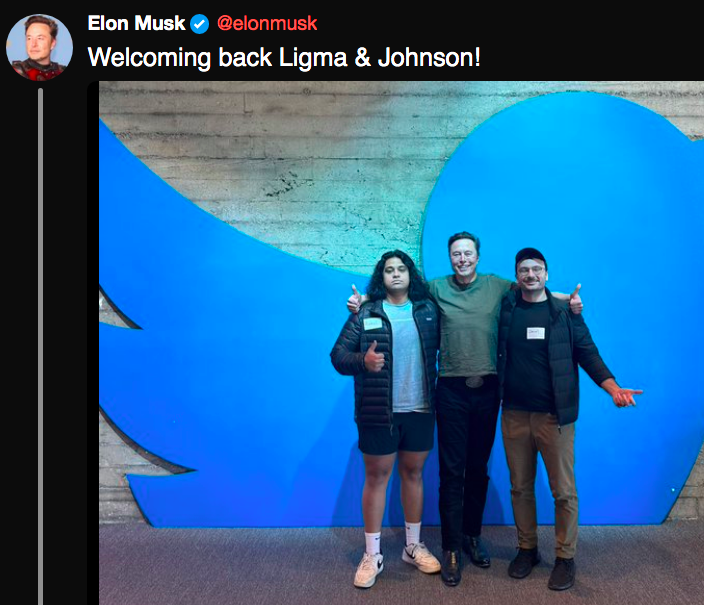 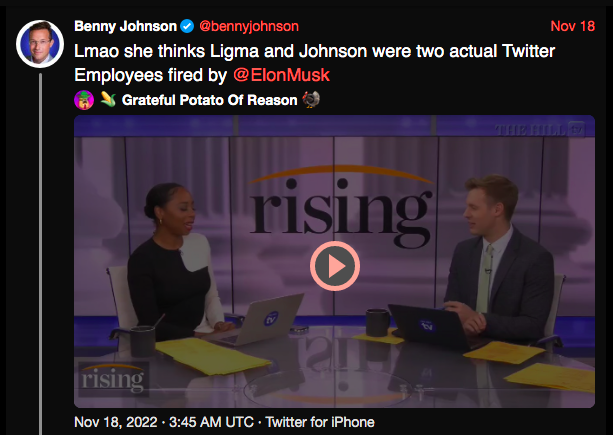 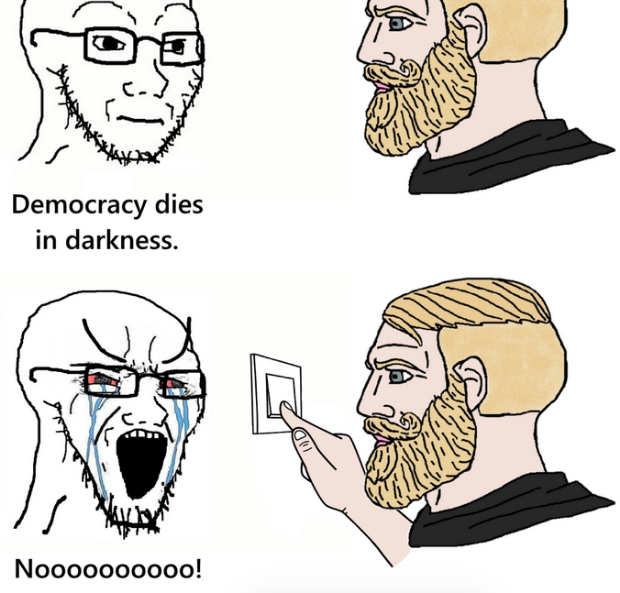 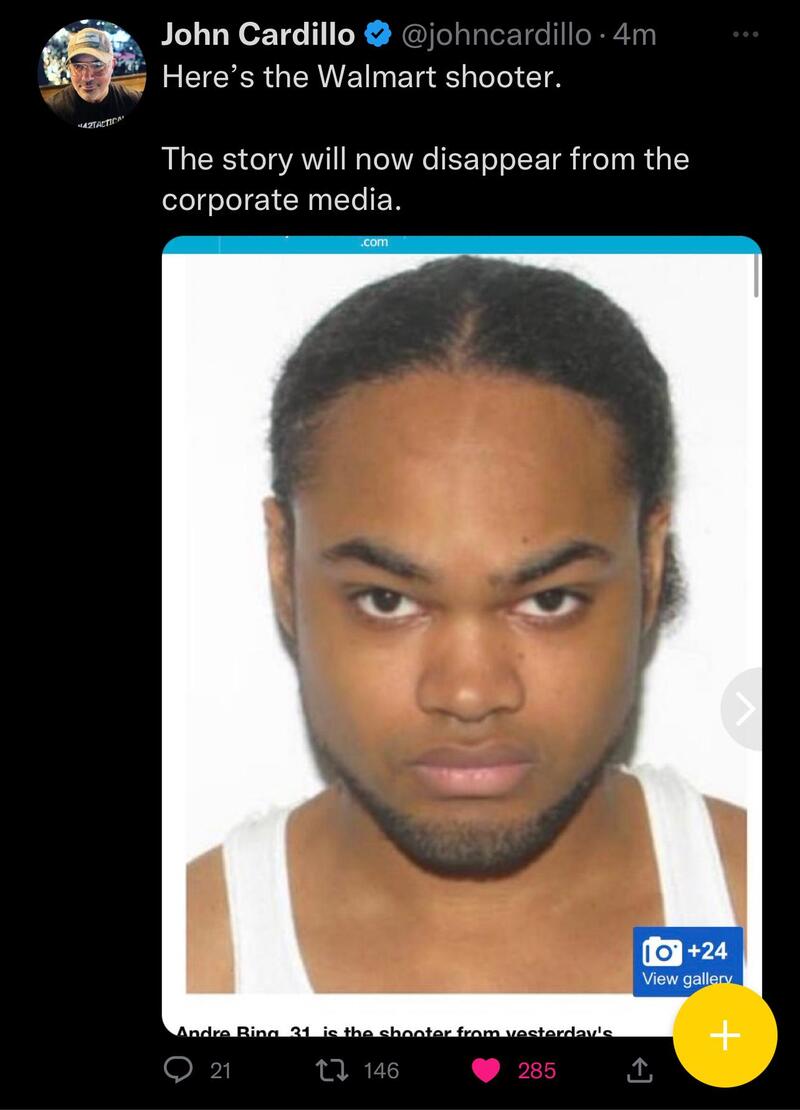 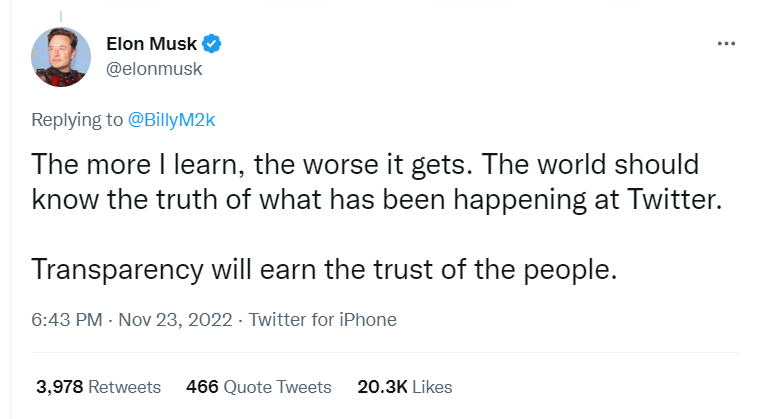 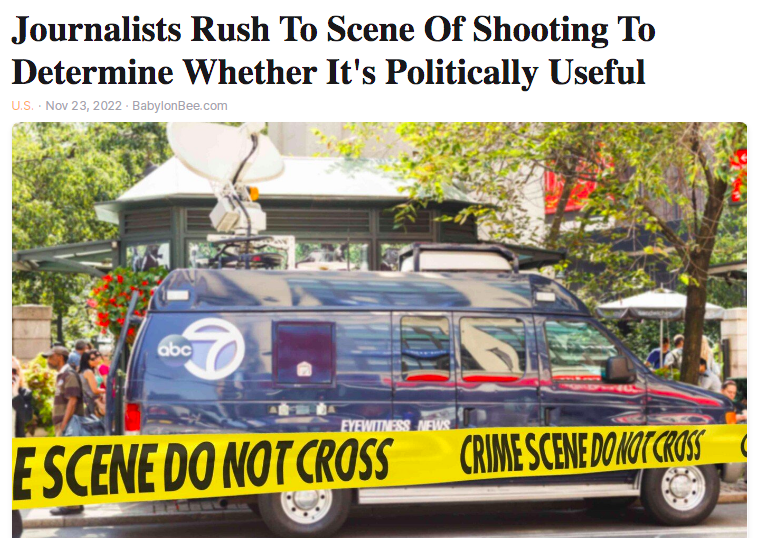 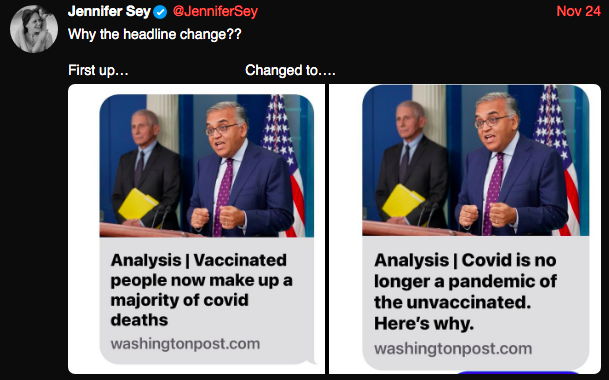 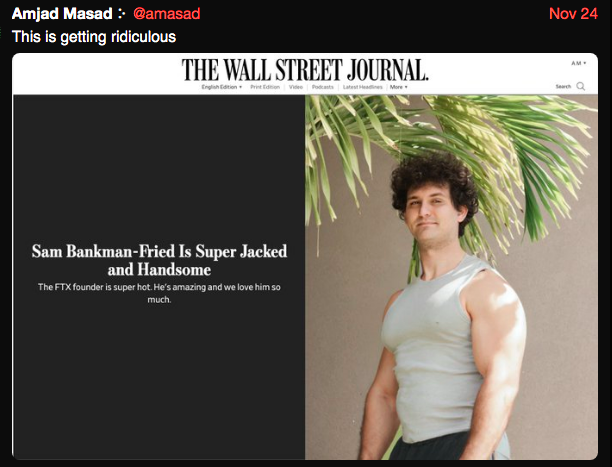 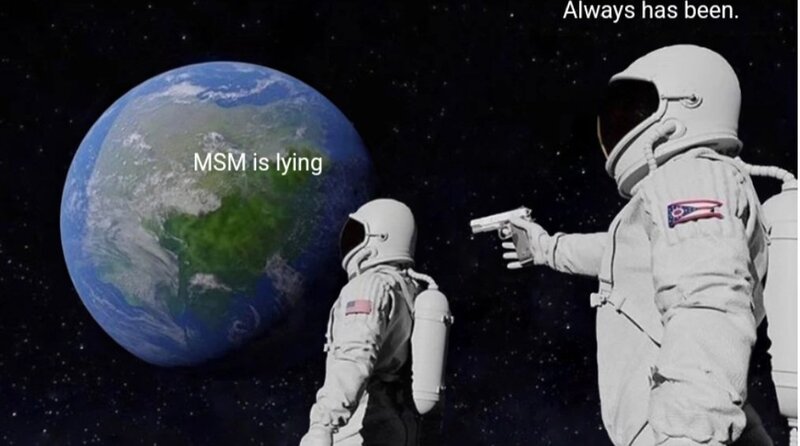 Patrick   2022 Nov 26, 11:28am
Twitter now seems to be adding the ability for the public to summarize the bullshit in corporate media stories: 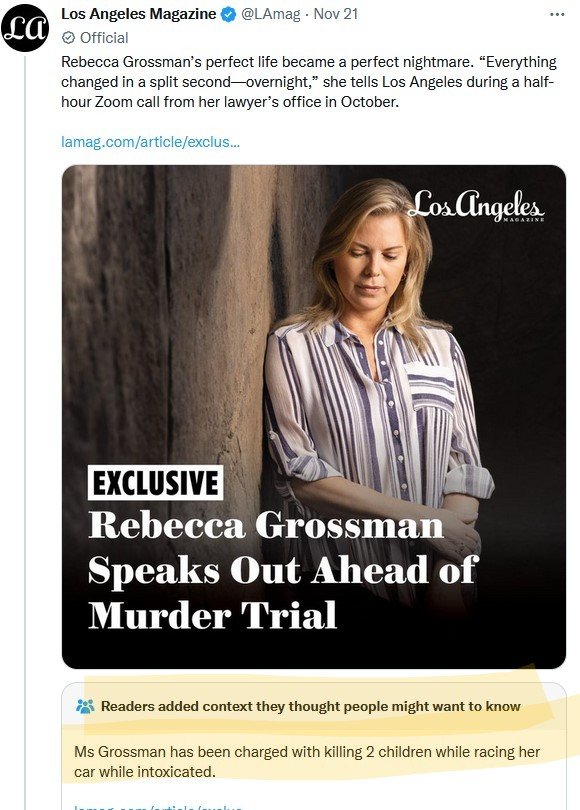 This is very good! 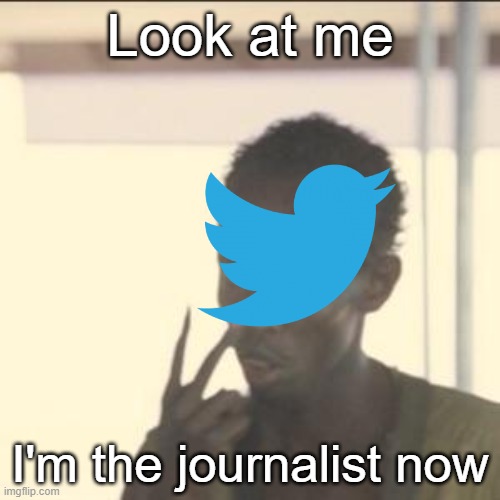