WookieMan   2022 Jan 7, 1:45am
My question is when did everyone become deaf? Like seriously. Pressers rarely had the sign language guys. It's fucking weird. Did closed captioning (CC) go away? My kids will turn that shit on and it pisses me off.

Prickzker has his wingman daily here on local affiliates. Why? The tech is beyond fine for the mic to do 95% accurate translation to CC text... unless you're Prickzker with a Italian sub jammed down your throat, shitting on the pipe from the toilet you removed to save a shit ton in property taxes. Hell even if there was a toilet his ass would eat it.
36

Booger   2022 Jan 7, 1:59am
Lining up for hours for a test with bonus footage of a Karen getting car damage:
https://youtu.be/8MGcC1btpDk?source=patrick.net
37 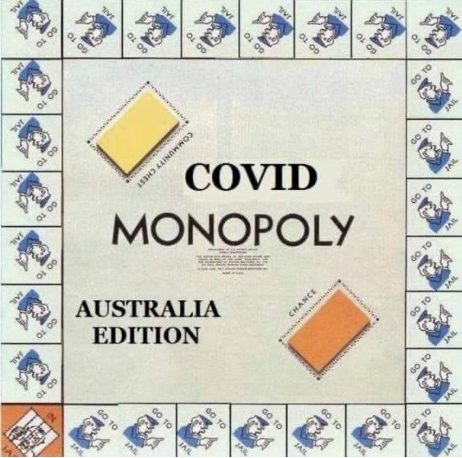 Australia: large crowd of people around the parliament building. Even the MSM can't ignore it anymore.

No truckers in Australia?

They have road trains there with not one but up to 4 trailers.
46

Australians are never going to forget how the police treated them these past 2 years for simply wanting freedom. 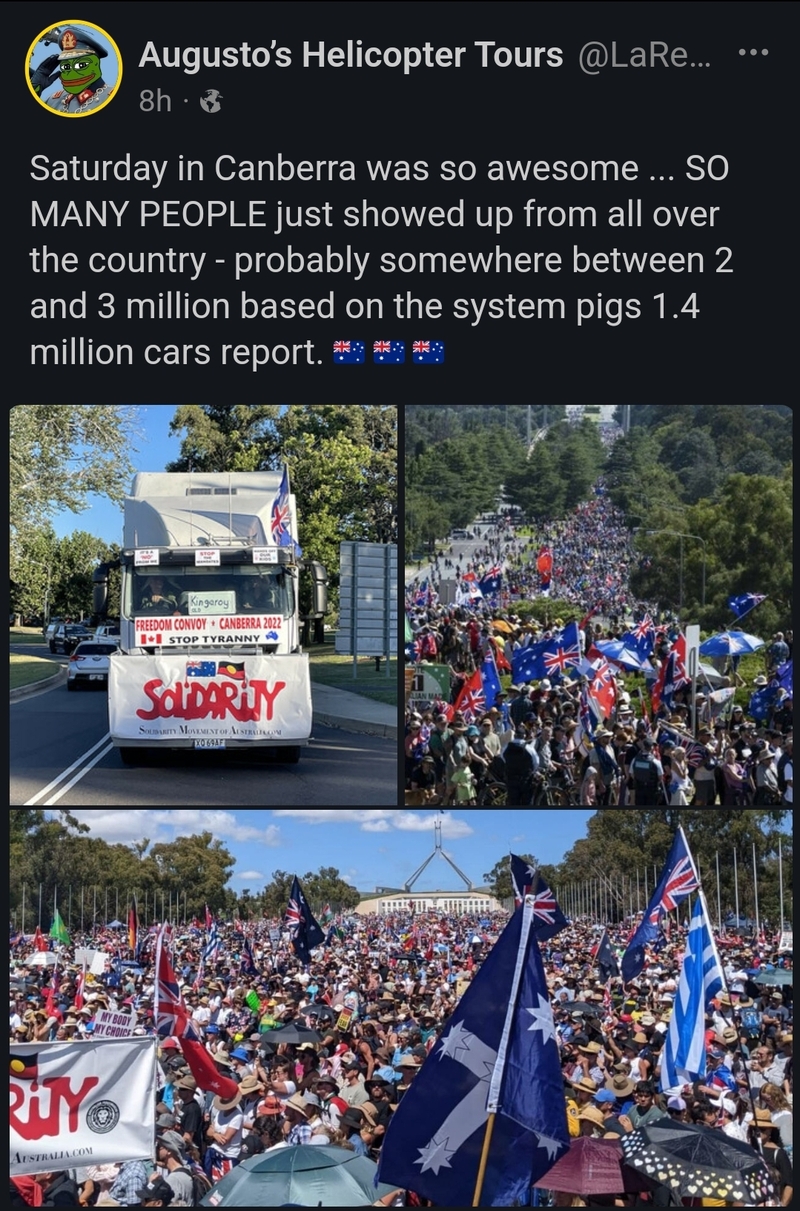 HeadSet   2022 Feb 13, 2:01pm
"Solidarity" means "NAZI" in Australian. Also, that flag so many are waving - the upper part has a Confederate flag look-alike in the corner and the stars in the blue part are arranged like a swastika.
51

Avi Yemini
@OzraeliAvi
29 May 2021
Today police surrounded me for allegedly "not being a Victoria Police accredited journalist".

WATCH & RT what happened next.

Apparently you cannot be a journalist in Australia unless you are approved by the government. And do you really think you're going to get approval if you're pointing out government crimes like mandatory injection with a dangerous and ineffective experiment?
52 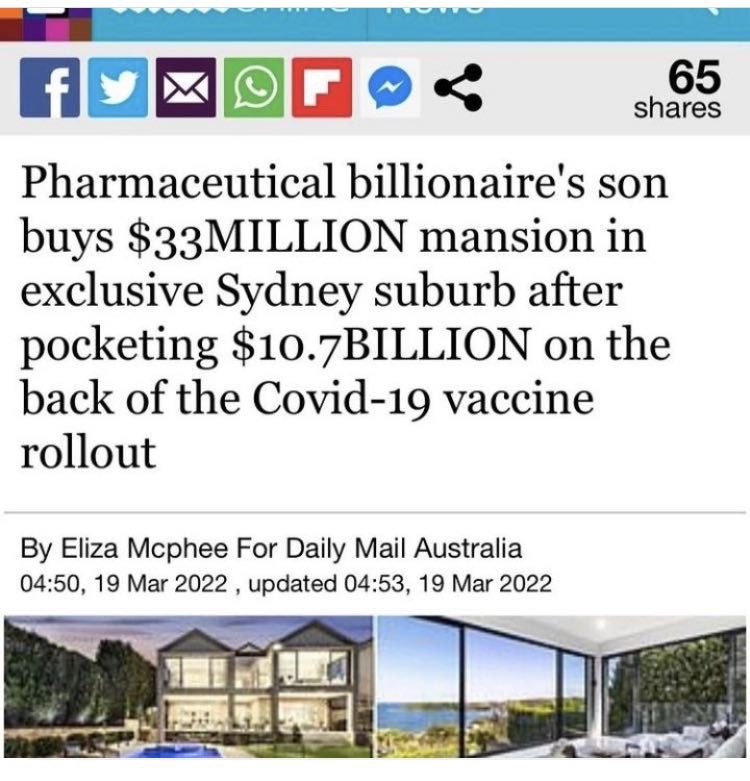 Ceffer   2022 Mar 30, 10:51am
Covid hasn't dissolved in the sunlight yet, in spite of Ukraine diversion. They are still in love with the tyranny.

I saw some thing on Telegram where a German health minister stated that even if the vaccines do harm and kill people, she didn't care, the vaccine policies and mandates were moving forward. It's just a somewhat kinder way of killing the populace without lining them up over open ditches, shooting them, and shoving them into the common grave with their foot.
55 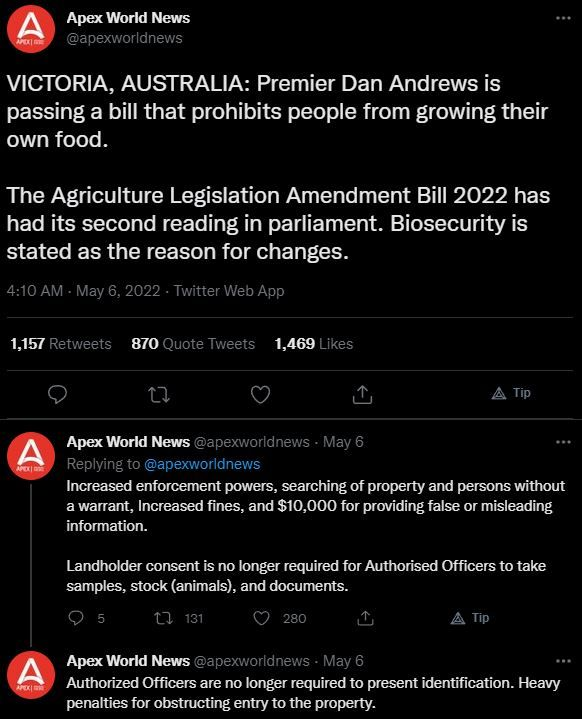 Every dictator in history wants to make everyone dependent on him. Not being allowed to grow your own food means you are subject to the government's "generosity."
59

Is this new gov is going to be better or worse.
61

Is this new gov is going to be better or worse.


That shitshow was a conservative rule?
62

Ezra Levant 🍁🚛
@ezralevant
3h
🚨Avi is our star investigative journalist who just spent a week exposing oligarchs and bureaucrats at the World Economic Forum and the UN’s World Health Organization. So when he landed back home in Australia, police detained him and seized his passport.

Avi Yemini
@OzraeliAvi
3h
Replying to @OzraeliAvi
UPDATE: Released without charge thanks to my legendary lawyer who took the call at 11pm on a Saturday night.

But they impounded my passport.

Later we go to court. I’ll keep you posted.

Thanks for all the love.

Avi Yemini
@OzraeliAvi
3h
UPDATE: Released without charge thanks to my legendary lawyer who took the call at 11pm on a Saturday night.

But they impounded my passport.

Later we go to court. I’ll keep you posted.

Thanks for all the love.

Avi Yemini
@OzraeliAvi
4h
#BREAKING: I’ve been detained at Melbourne airport because my passport has a “scratch” in it.

They say they’re impounding the document and holding me indefinitely.

This has nothing to do with my travels.

Wow, Australia really is going full Nazi. You cannot do political reporting on the WEF and WHO and be Australian, or you risk arrest.
63 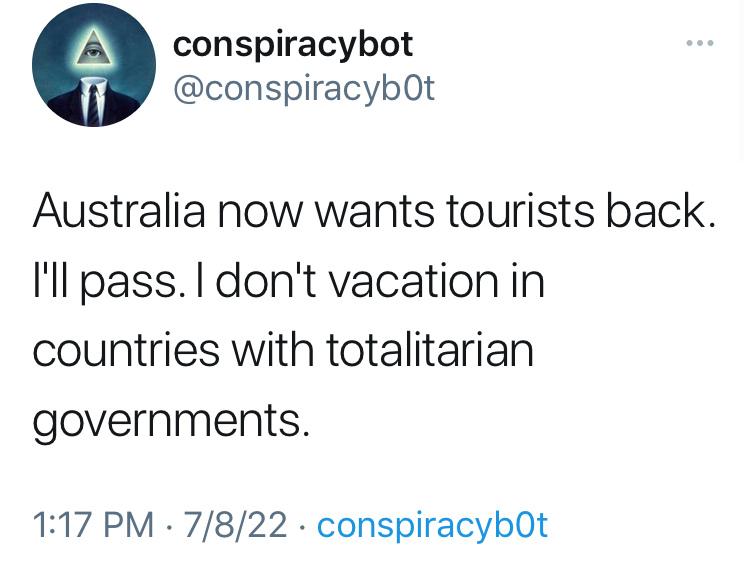 August 6, 2022
Protester in Australia banned from using private apps, has to turn over his phone and passwords to cops

How fortunate that the Australian population is disarmed. We can never allow this.
66

That shitshow was a conservative rule?

Left and right are just words.

What are the POLICIES of each, the BELIEFS of each? I was born in 1971, when I was a little kid, "the left" was anti-war - that's not true at all now and probably never was. They were anti-conscription into the Vietnam war, but they had no problem sending others to it.

Eventually, this is going to lead t o a bloody revolution, not a civil war, a revolution.

You have to think of the government as a criminal syndicate, because that's exactly what it is, and the government isn't who you elect. They are mostly bureaucrats.

I worked BRIEFLY in government "service" in college, since I went to a state school as a student. Incompetence isn't punished, excellence isn't rewarded - only obedience is rewarded. There's no economic incentive not to suck. Your job is to suck up and do whatever you are told to do. Your boss can be ENTIRELY incompetent, but as long as they are sucking the shit out of the next asshole above them, they will never be released from their position.

It's a soul killing job, and the people at the top, have no souls at all.

Government is terrible. Just be obedient, and if you fuck up, nobody cares and the government will shield you. Why do you think we have a bunch of fucking crazy teachers in LGBTQ+ophile nonsense in elementary school?
67

Efrat Fenigson
@efenigson
Aug 23
Hundreds of unvaccinated teachers in Queensland, Australia are being punished with a salary cut, for not taking the jab.

@dai_le is more of a patriot than anyone else in that chamber. 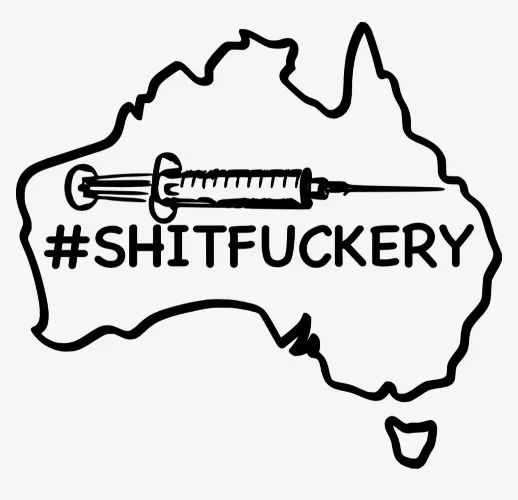 Al_Sharpton_for_President   2022 Oct 24, 7:03pm
Australia’s huge Covid lies finally exposed
More than two and a half years after Covid-19 first came to Australia, the truth has finally emerged and the lies have been exposed.

The thing about the truth is that it always comes out. It may take years, decades or even centuries but reality has a way of asserting itself. Lies inevitably fall apart.

And so more than two and a half years after Covid-19 first came to Australian shores the truth has finally emerged about our various governments’ response to it and the lies have been exposed.

These are the findings of the first and so-far only full inquiry into Australia’s response to Covid, an independent review funded by three major philanthropic organisation and headed by Peter Shergold, previously the most senior public servant in the country and now Western Sydney University chancellor — an eminent and highly qualified mind deeply respected on both sides of politics.

They are unequivocal, they are damning and they are almost word for word exactly what I and a few other brave souls have been saying from the very beginning of the pandemic.

As I have been shouting from every platform I can since 2020, the most egregious act was that committed against our children — the mass shutdown of schools on the basis of no evidence whatsoever. To their eternal shame, state premiers and chief health officers were both complicit in this.

They were wrong and they caused untold damage that will be immeasurable and long-lasting. The inquiry makes this crystal clear.

“Schools should have stayed open,” the almost 100-page report found, stressing “it was wrong to close entire school systems, particularly once new information indicated that schools were not high-transmission environments”.

Moreover the school closures were “likely to have significant adverse impacts on children’s outcomes in education, social development and mental and physical health”.

And again: “For children and parents (particularly women), we failed to get the balance right between protecting health and imposing long-term costs on education, mental health, the economy and workforce outcomes.”

In regards to lockdowns and border closures and other restrictions it found they were effectively inhumane and should only have ever been used as a “last resort” — not the trigger-happy response of state and territory governments, for which they were cheered on by their acolytes.

“Rules were too often formulated and enforced in ways that lacked fairness and compassion. Such overreach undermined public trust and confidence in the institutions that are vital to effective crisis response.”

And as the Sydney Morning Herald and The Age reported, it was poorer communities who were hardest hit, especially by the school closures.

The papers cited a Mitchell Institute study finding that one in five children in lower socio-economic postcodes did not have access to a laptop or computer at home and a survey of NSW teachers in 2020 found that only 18 per cent of teachers in low socio-economic status schools had confidence that their students were learning well from remote classes.

And the SMH also reported in 2020 — as I have often cited — that more than 3000 students simply disappeared out of public schools in NSW after the first shutdown.

A groundbreaking Daily Telegraph expose this month revealed 7000 NSW students, overwhelmingly from disadvantaged cohorts, who were not enrolled at any school.

University of Melbourne academic Professor Jim Watterston told the paper these were among 50,000 school-aged children in Australia who are “not recorded anywhere” and that the issue had worsened through Covid.

Constantly, repeatedly, publicly — with the evidence right there, at the time, on my side. And yet I, and anyone else who dared question the lockdown-shutdown orthodoxy, was dismissed, abused, harassed and condemned — be it by the dead-eyed cultists of the #IstandwithDan movement or the Chief Health Officer of Victoria himself who gave his assent to these devastating school closures in the first place while allowing hotel quarantine to collapse under his watch.

Still, at least he found enough time to tweet.

These are the sort of people who like to talk about being “on the right side of history” and now history has caught up with them. They were wrong, dead wrong.

Not just the decision makers who awarded themselves close to messianic status — with powers to match — but the frothing mobs that cheered them on. They were wrong, wrong, wrong and wrong all along.

And yet anyone who disagreed with them was hounded with such ferocity that many have abandoned social media altogether. So what are the consequences for those who caused so much harm and fuelled the economic and social crisis we are now facing while savagely attacking anyone who questioned them?

Already they are crawling sideways, changing their tune or shrinking from public view. The usual Twitter warriors seem oddly subdued.

Because now the truth is here. Not out there, but right here, right now.

And the truth always wins.


And the truth always wins.

Maybe, but in this case long after the scammers have cashed the checks.
72

Lots of Chinese nationals have become Australian citizens. They bring their Chicom authoritarian mindset with them.

I wonder how much Chicom influence there is on Australia such as why Australia went krazy authoritarian on COVID rules and lockdowns. 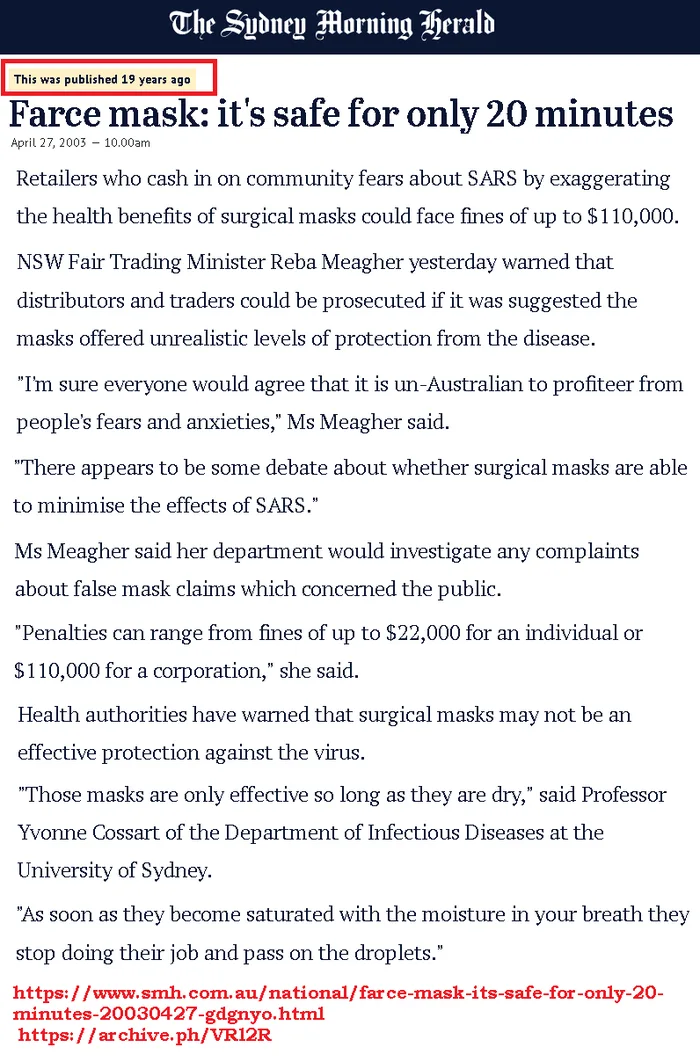