With all the talk about the school shootings, let's take a look at what the 2nd Amendment actually says:

"A well regulated Militia, being necessary to the security of a free State, the right of the people to keep and bear Arms, shall not be infringed."

Couple things to note in there:

1. The specific mention of a militia being the reason for the need to bear arms.
2. The 2nd Amendment never mentions the word gun at all.

So, what exactly is the definition of "arms"?

In 1755 Dr. Johnson’s Dictionary of the English Language was first published. It defined “arms” as “weapons of offence, or armour of defence.”

Weapons of offence would seem to include pretty much anything and everything, from knives to nuclear weapons. The US has already seen fit to ban some weapons of offence so the 2nd Amendment clearly has not been interpreted strictly as meaning that the US cannot ban all "arms". Therefore, the 2nd Amendment does not guarantee citizens the right to own whatever weapons they choose.

So it then becomes a question of which weapons should be banned, which should be strictly regulated, and which should be lightly regulated or not at all. Like anything else, we should weigh an individual's right with society's right. When looked at in that manner, it becomes very difficult to justify why fully automatic or semi automatic rifles should be allowed. What purpose do they serve an individual? And why would that purpose outweigh the extreme damage those weapons have cased society??

Patrick thinks the Chamber of Commerce is the worst organization, and he may be correct, but the NRA is not far behind. 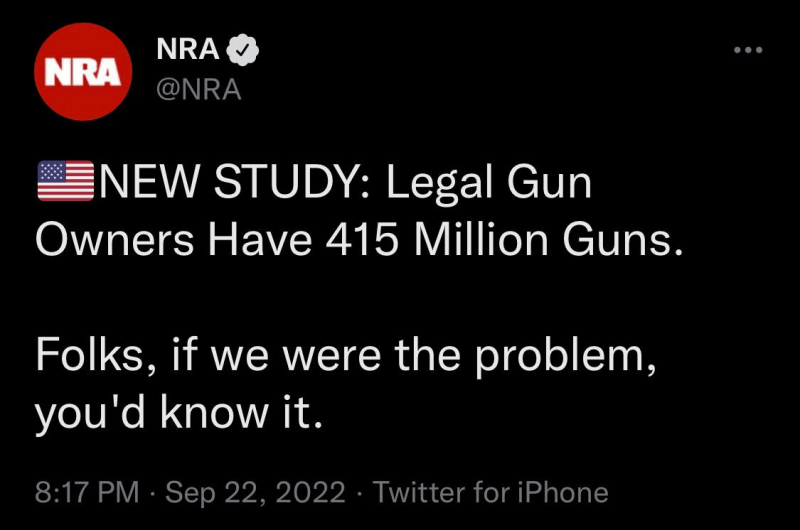 
after a day of training with carbine, i lose hearing for good 5 to 6 hours.

This is foolish for you to do. You're going to go deaf.

I have a family member that’s been losing his hearing over the last decade (gradually) and it’s been particularly difficult on him. Don’t take hearing for granted. Life get significantly harder if you can’t hear what’s around you.


so i did it, i went and got me noise canceling headphones. gonna give those a shot.
852 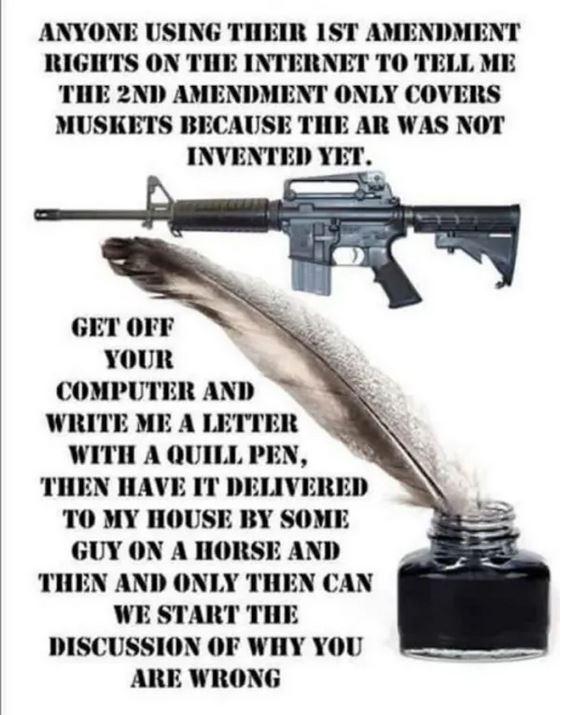 
I really want a 12 pounder cannon. 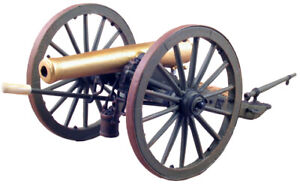 One like this can be purchased for under ten grand. Balls and powder extra. Wear hearing protection.
854 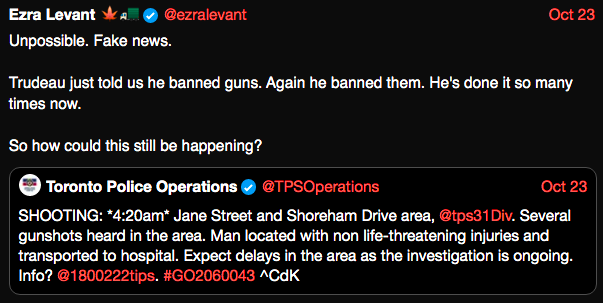 U.S. District Judge Joseph Goodwin of West Virginia has ruled that a federal ban on possessing a gun with its serial number removed is unconstitutional!

The judge stated that his ruling simply abides by the Supreme Court’s ruling in the case of New York State Rifle & Pistol Association v. Bruen, which struck down a New York law that placed additional limits on who can carry a firearm outside of their home. 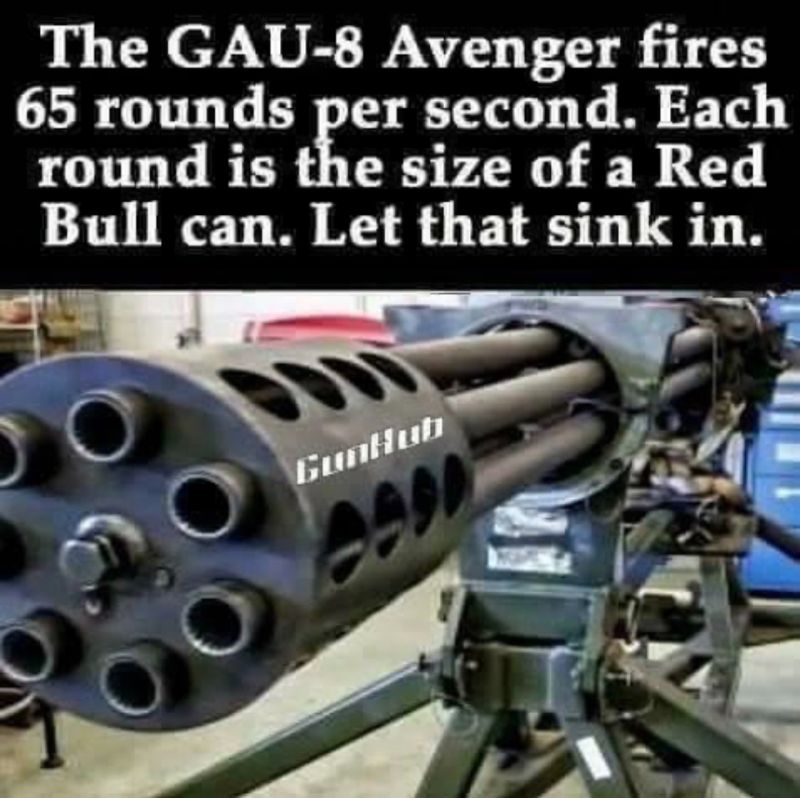 
Really, I think the best protection against a home intruder is a shotgun with bird shot. It probably won't kill them, but it sure as hell will hurt them.

Yeah, can't afford to shoot that. 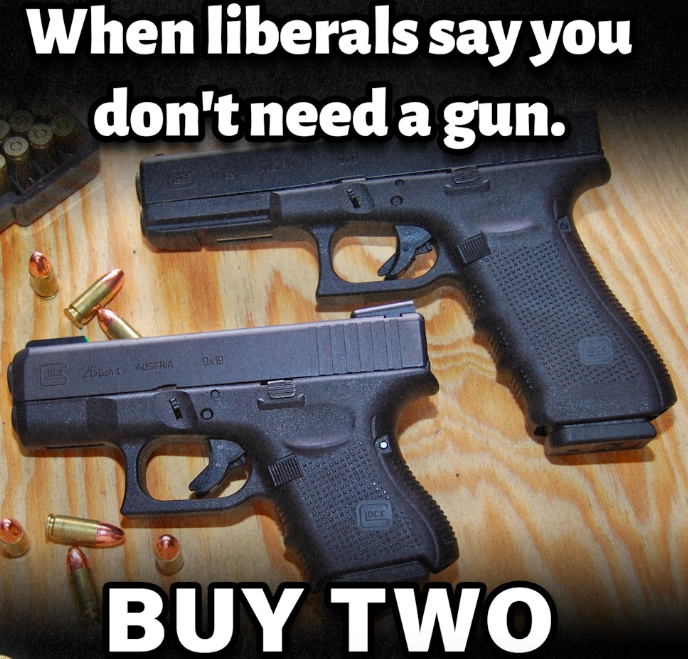 Eric Holder   2022 Nov 2, 2:24pm
I must reiterate again: if you think of self-defense with a shotgun loaded with birdshot - don't. Your opponent will simply remove it from under their skin with tweezers. After they kill you and put that shotgun up to the trigger guard in your arse, that is.
862   AmericanKulak   2022 Nov 2, 2:39pm
#4 Steel Birdshot - through the denim or 4 layers of T-shirt, most through the pectoral "Ribs" ripping it to shreds; and most of them jangling around the internal organs with a few ending up in the back "Ribs"
https://www.youtube.com/watch?v=HF5N5tfMuX4
8 Minutes in for the #4 Steel Birdshot at 7 yards with a 12 ga.

Test #2 with 12ga. and #4 Lead Shot - through the clothes, rib bones, into the heart, few got through the drywall behind - from a few yards. Ideal for home defense.
https://www.youtube.com/watch?v=zaR1EVybUgc

The surgeon will be plucking them out with a tweezer, over the course of many, many open chest/stomach operations. If by some miracle they live with heart, lungs, kidneys turned to swiss cheese by a shitload of lead or steel balls..

Now if you're shooting somebody 30 yds away, different story.
863 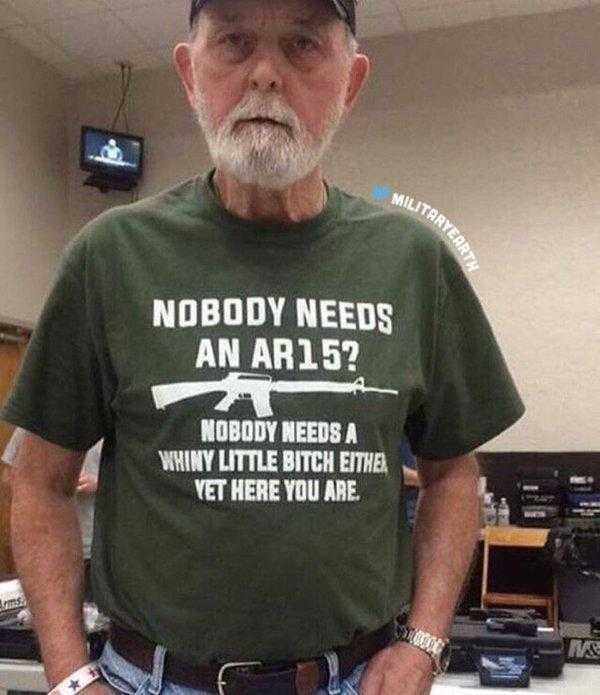 
20 Gauge is almost as effective, lighter, much easier to handle the recoil, especially for females.

Agreed. 20 Ga. is the sweet spot and easier on everybody's shoulders after a while.
866 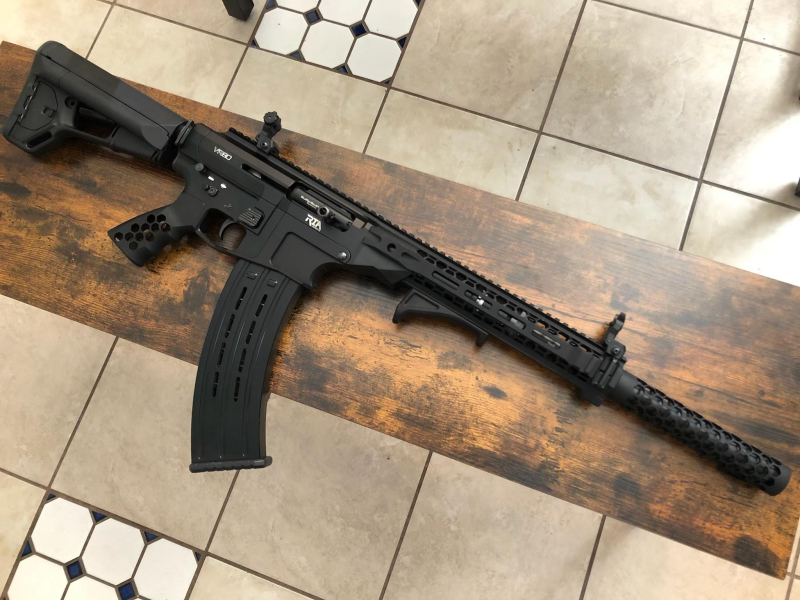 id get a good scope, once you zero it accuracy goes way up.
868

Oh, it's not mine. Saw in on a Sunday Gunday thread and started drooling though.

ah i see. heres mine i use on field days. very standard carbine. attachments make a difference. rails everywhere make it easy to modify. and the barrel is covered so doesnt get hot to touch, butt can go in and out so easy to adjust for your height. i would recommend those for everyday training. 600ft can hit comfortably.

standard nato rounds, easy to get. this one can shoot several types. 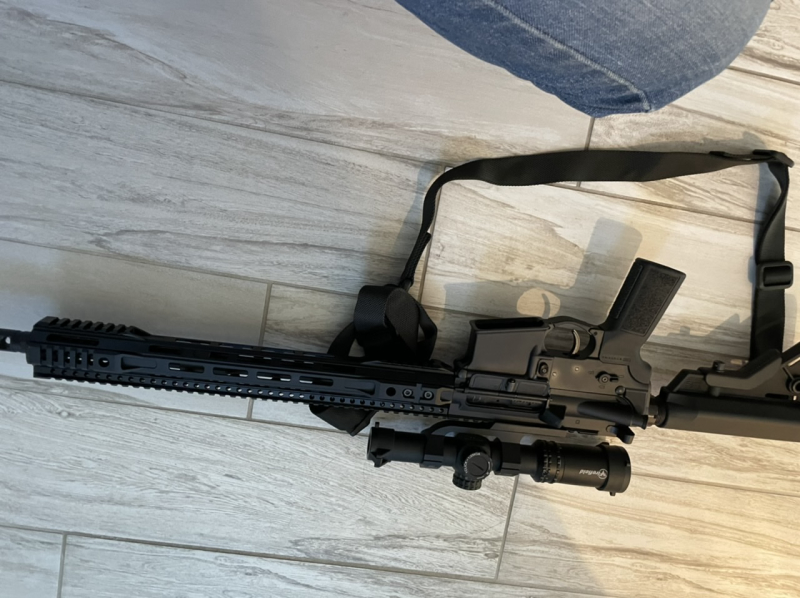 thats my recommendation. any decent gun shop will let you buy these if you arent in a blue state. and you just get attachments as you need them.
870


OIC, picture I posted is actually a shotgun.

thats cool, i haven’t seen those, but i haven’t really looked. i think everyone in our unit uses carbines and pistols, no shotguns except for duck hunting.
872 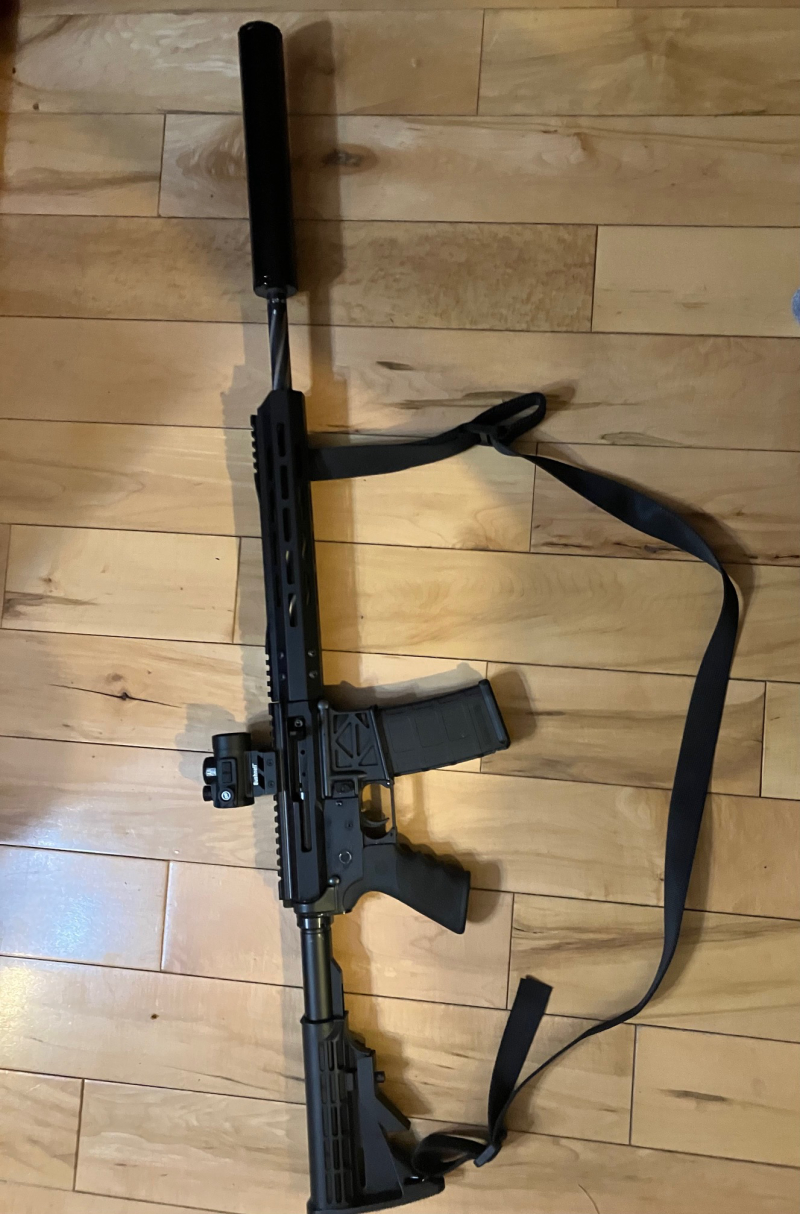 nice, which silencer did you get? im still waiting on a stamp for mine. how quiet is it with yours?
874


30 round mag and silencer.

Interesting. The only "silent" gun I have seen was long ago and it was a British gun with a very fat barrel (like a muffler) and it shot a subsonic round. Before you described what you have, I thought James Bond type silencers were a myth, as even if they muffle the explosion of the gunpowder, how would they silence the bullets sonic crack?
875

I have a family member that’s been losing his hearing over the last decade (gradually) and it’s been particularly difficult on him. Don’t take hearing for granted. Life get significantly harder if you can’t hear what’s around you.

Yeah, I'm about to be 40 with wicked bad tinnitus. I can't hear people when I'm at a conference center with just background noise with regards to normal conversation. Or my kids basketball games, I'd guess my hearing is at 50% of what it should be. Playing drums with no ear plugs, live shows with a monitor blasting in my ear, practices, etc. I anticipate needing hearing aids by 50, maybe earlier.

Don't play around with hearing. I'm the guy that wears ear muffs when mowing the lawn now because of it. It kills my sleep and gives me anxiety, the tinnitus that is. A white noise maker I got a couple months back has been a huuuuuuge relief and help with sleeping. Otherwise all I hear is ringing in my ears. It's happening right now. I can live with it, but I'm pretty serious about ear protection now moving forward for even mundane tasks. Concerts are my only weakness. I just cannot wear earplugs at them. But that's 3-4 times a year.

Guns are bad for ears, but I've found that consistent high decibel noise causes me more problems as I age. Doesn't have to be "loud" so to speak. It's stuff over 80-90db for an hour or two. Gun shots really don't bother me, or fireworks as another comparison.
877


Yeah, I'm about to be 40 with wicked bad tinnitus.

I had the same problems, as did my father-in-law. We found that cutting caffeine greatly reduced the tinnitus. Maybe that will work for you. I wish I had discovered the caffeine angle before the AF grounded me for hearing loss.
878

By John Petrolino. Nov 6, 2022
The other week the NYS Jewish Gun Club approached a Federal court in Manhattan for a stay on New York's draconian carry law. The NYS Jewish Gun Club is one of many that have lined up to challenge the unconstitutional provisions in New York's law, which were signed by unelected Governor Hochul. The case Goldstein v. Hochul challenges what "sensitive places" are under the new law.

One of the attorneys representing the NYS Jewish Gun Club, Ameer Benno, previously stated, "By designating all houses of worship as 'sensitive places' where exercising the fundamental right to self defense will now be punishable by prison time, the government has not only violated the Second Amendment but also the First Amendment's guarantee of the free exercise of religion." Different cases have yielded different results, but according to the NYS Jewish Gun Club, the court they've filed in are slow rolling the process. 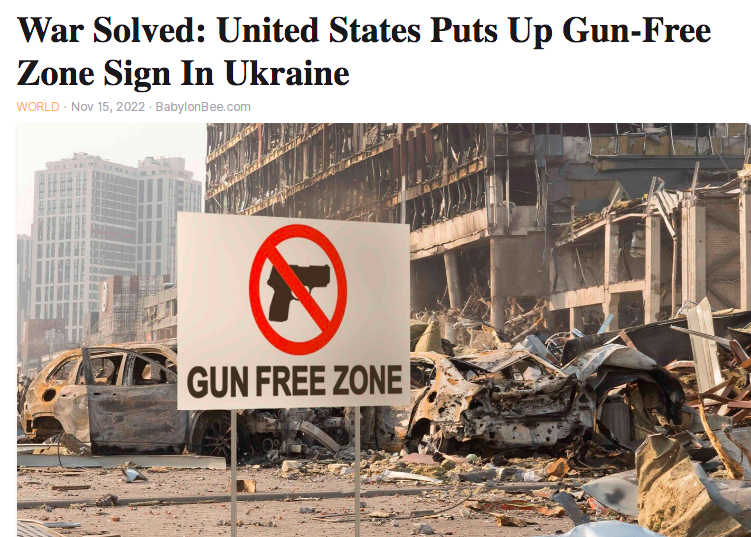 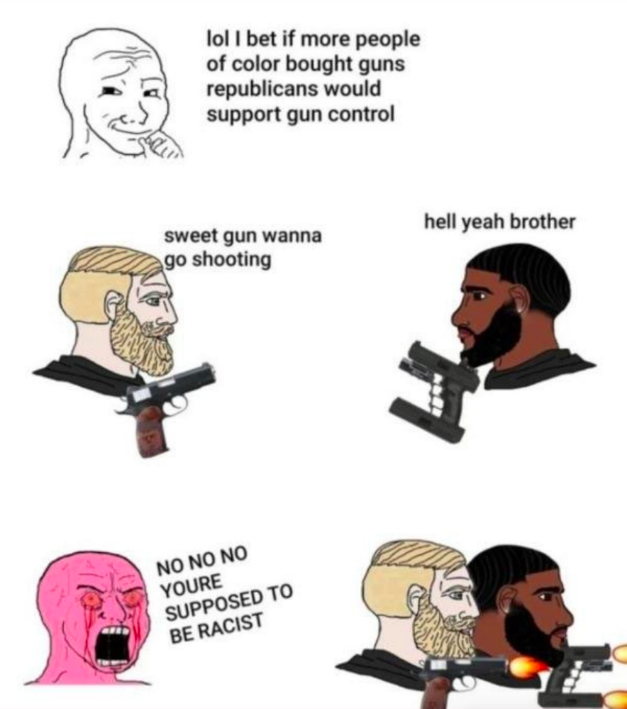 Hopefully soon Texas will win their lawsuit against the ATF regarding Texas made suppressors. Waiting 14 months for the tax stamp is complete bullshit. Even the eForms is slow. I submitted an eForm last March and still have not received the approval.

How do they expect to process millions of stamps because of their bullshit pistol brace rule dropping around Christmas?
883


Hopefully soon Texas will win their lawsuit against the ATF regarding Texas made suppressors.

How loud is that silencer?
884

Hopefully soon Texas will win their lawsuit against the ATF regarding Texas made suppressors.

How loud is that silencer?


I had the media BS about silencers. In films, they make it appear that it's nearly silent, and you wouldn't hear it one room away. All they do is make it so that the person with the weapon isn't as likely to have ringing ears.
885


I had the media BS about silencers. In films, they make it appear that it's nearly silent, and you wouldn't hear it one room away. All they do is make it so that the person with the weapon isn't as likely to have ringing ears.

I thought as much. The only silent gun I know of is a British military weapon that has a barrel that is the size of a small muffler and shoots a subsonic round. I do not see how a silencer on a normal supersonic round weapon can stop the sonic crack when the bullet leaves the gun.
886


I thought as much. The only silent gun I know of is a British military weapon that has a barrel that is the size of a small muffler and shoots a subsonic round. I do not see how a silencer on a normal supersonic round weapon can stop the sonic crack when the bullet leaves the gun.

I've never shot one, but I think the quietest "gun" is actually an air rifle which uses compressed air as a propellant. These are unregulated, and subsonic. They were often used in WWI and I think even II for sniper's weapons, because they don't leave smoke.

Lewis and Clark made is across the continent with one of these weapons - the Girardoni air rifle. The legend (perhaps true) is that Lewis and Clark were able to travel the entire nation without being attacked because when they encountered a new tribe, they demonstrated the rifle to the shock of the tribe - demonstrating that (had they had more weapons) they were fully capable of defending themselves.

Basically, they would shoot at a tree, and the muzzle velocity was fast enough so it looked like, suddenly, there was a hole in the tree. The natives wouldn't have any concept of the limit of the weapon, that it could only do 30 rounds reasonably, and that it was a cumbersome weapon to use which required a great deal of training and maintenance.
887 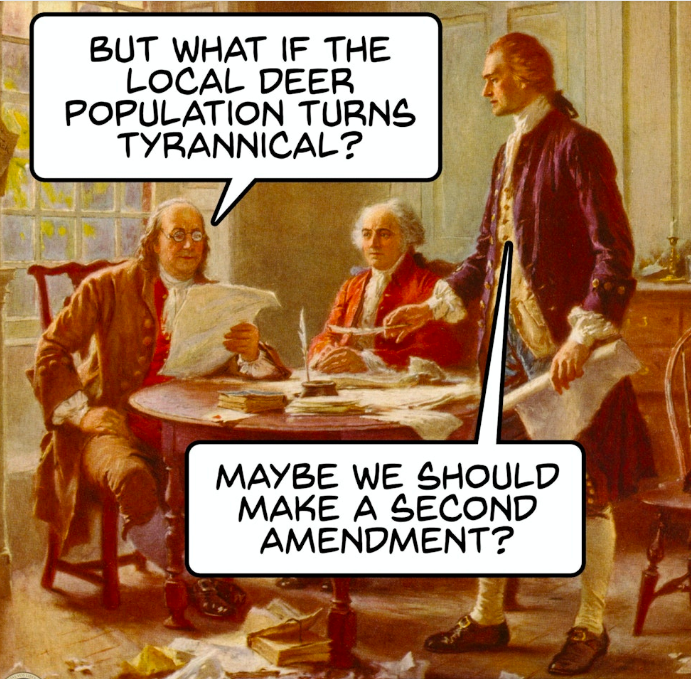 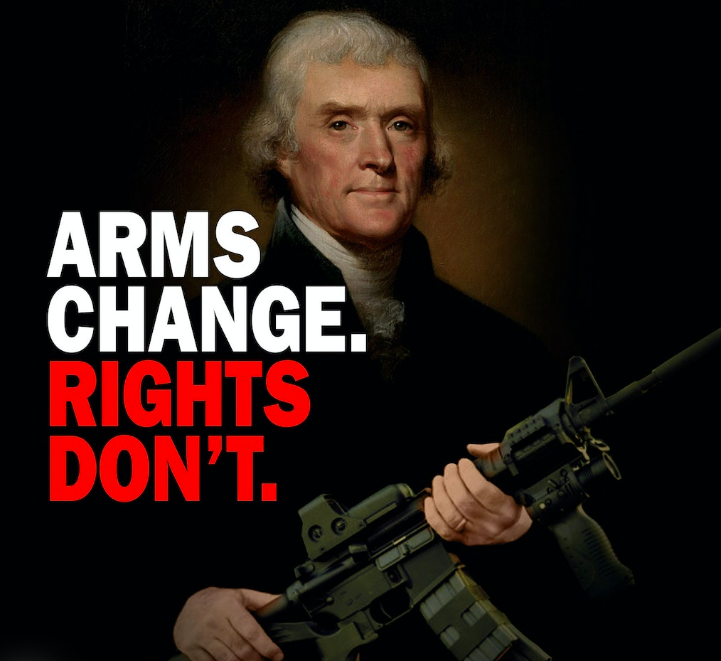